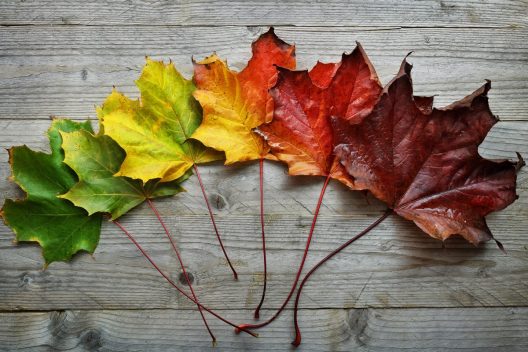 Mirrors only lie if they have been lied to!
Look in the mirror — are you sure you are you?

Begin challenging your own assumptions. Your assumptions are your windows on the world. Scrub them off every once in awhile, or the light won’t come in. ~ Alan Alda

A window invites us to look through it. A mirror invites us to look into it. We need both windows and mirrors in our life. We need to look outwards and beyond and we need to look deeply within. We need to see the world at large in all its splendour and balance as well as its suffering and chaos. We need to see ourselves in all our beauty and purity as well as our compromising contradictions. What we see within and without calls for thankful praise and heartfelt lament. What we see will cause intrigue, doubt, confidence, questioning, liberation and resurrection.

Both windows and mirrors invite us to see new things and in new ways. This is one of the main reasons we gather here for worship each week: To see. To see all of creation, each other and ourselves through the window of Jesus’ healing vision of justice and equality for all and in the mirror of his accepting and engaging love of all. Authentic worship includes both windows and mirrors.

Windows get dirty and mirrors mist up. Both need cleaning from time to time to keep clarity. But here in lies a danger. We may be tempted to spend more time looking at the window than through it and at the mirror rather than into it — driven by an obsession to keep it clean. When this happens, our vision that the window had hoped to extend and which the mirror had hoped to deepen becomes myopic. We become professional window cleaners — wiping and polishing but no longer seeing or at least not seeing what the window and mirror had hoped we see. With worship we become a window cleaner when we worship the way we worship. With Church we become a window cleaner when we love our community more than the truth. With Jesus this occurs when we confuse idolising him with following him.

Where else this analogy is true in your living.

The following article was written by Rebecca Davis for the Daily Maverick [25/02/2013]. Be warned it is crucifyingly disturbing … which I believe is all the more reason we should read it. Today in our Lenten Learnings we reflected on “Blessed are those who mourn …” Only those who feel can actually mourn and only those who love can actually feel … may God help us love.

While the media (including the Daily Maverick) fed the public appetite for Pistorius-related news over the past two weeks, life continued as normal for many. In South Africa, “life as normal” involves daily violence against women.

The disturbing story of Mido Macia, the 27-year-old Mozambican who died in custody after being dragged through the streets by police, should not come as a surprise. The incident was horrendous and publicly shared on video. But it’s indicative of a police force that rapes and murders instead of serves and protects. By GREG NICOLSON.

Police brutality comes as a surprise? Really? Opinions of Prof. Pierre de Vos, professor of Constitutional Law at the University of Cape Town:

Two weeks ago I joined 80 colleagues for a three day summit under the leadership of the Bishop, Michel Hansrod. As one does we began by sharing news about our lives since the last time we met. “So and so had a child”… “so and so is recovering from surgery”… “so and so graduated”, etc. Shockingly in these passing greetings we heard of six murders of family/congregational members. We would be hard pressed to find too many places in the world, (that are not at war), with that high incidence of murder. The heaviness of the violence has settled on all of us in recent days. Violence, especially violence against women is endemic in our society.

It is tempting to place the blame at the feet of others — distancing ourselves from responsibility for the violence that envelopes us, but it is not truthful or helpful. Rather we should take to heart the often quoted words by Gandhi: “Be the change you want to see in the world”.

I appeal to you — if you have a firearm, hand it in at a SAPS station to be destroyed. You may feel more safe, but you are not. In fact you are at a four times greater risk of being shot. Besides the fact that 95% of all gun owners will never use their gun for the purpose of self-defence, around about 2 000 licensed guns are stolen/lost every month — contributing to the increasing pool of illegal guns.

If you are in a relationship with someone who has a gun — talk to them about handing it in and removing it from your home. If you are in a relationship with someone who owns a firearm and has a history of violence or anger management issues, drug/alcohol abuse or who is unstable mentally, report this fact to your local police station and ask for the gun to be removed — this is not just your right but your duty. Men (18-29 years old) remain the overwhelming perpetrators and victims of gun crime in the world and in SA. The killing of women by a firearm is most often by someone known to them and in a so-called “safe” space like the home. In Liberia the women went on a “sex strike”. They refused to have sex until their men disarmed. Just a thought …

Thursday was All Saints Day – and it was also the day we planted an urban food garden on our boundary fence living out the word of Leviticus 19:9-10: 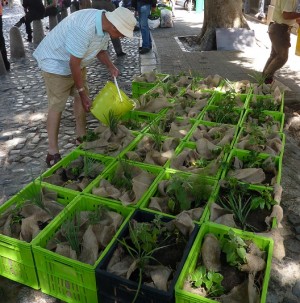 Here are the instructions:

Thanks to everyone for your participation on Thursday! And don’t forget that we also launched h e a v e n coffee – so when in town during the week be sure to visit. 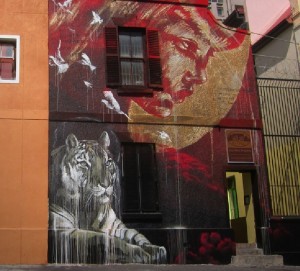 This is the incredible new wall art that surrounds Ons Plek. This is something that must be seen to be believed. The artist goes by the name of FAITH47. Her artwork covers the globe and can be found covering high rise buildings and shacks in informal settlements and on the ruins of dilapidated buildings.

I encourage you to check out her website at www.faith47.com.

We struggle to change because we cannot change without actually changing. How then do we cope with changing, especially when we know we need to? The vid expresses a thought or two on how to go about tackling the problem.