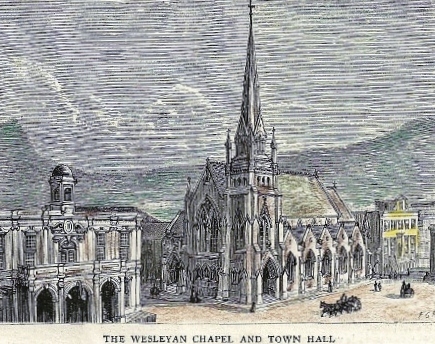 A hand-coloured engraving from “The Graphic” in 1886.

The story of the Central Methodist Mission (CMM), Cape Town began at the beginning of the 19th century.

Methodism first came to South Africa with the British soldiers stationed in the Cape Colony. The first Methodist convert in South Africa was a soldier by the name of John Irwin. He wrote: “I found out four or five men of the other regiments who met together and were called Methodists. We hired the use of a very small room in the town for two hours in a week, to hold a prayer meeting: there we read, sang and prayed, at length I got faith”.

It has also been recorded that Sergeant John Kendrick of the 21st Yorkshire Light Dragoons, a Methodist local preacher, conducted services at the Cape in 1806, and that John Middlemiss was the first Methodist leader. He told in a letter dated 16 September 1807 how, in 1806, he and a few other Christians… “tried to trace the Methodists or any that were striving to work out their own salvation among the regiments at the Cape. About forty-two Christians were traced – a few of these were ‘sincere Methodists'”.

These early meetings and services were held in adapted buildings: a hayloft above the stable in Plein Street and a disused wine store in Barrack Street. In 1822 a church a mission house was erected (also in Barrack Street) at a cost of £600. Dr. John Phillip conducted the official opening and the building served as both a school and a church.

A key figure in the church in Cape Town at this time was the Rev. Barnabas Shaw who arrived in Cape Town in 1816. Together with the Rev. E. Edwards and the Rev. T. Hodgson, Shaw played a major role in the growth of the church in Cape Town and this culminated in the erection of the Wesleyan Methodist Church on the corner of Burg and Church Streets in 1829 (Methodist House now stands on this site). A memorial tombstone in memory of Barnabas Shaw, who is regarded as the founder of South African Methodism, can be found to the left of the pulpit of the existing church.

After some time back in England, Thomas Hodgson returned to Cape Town in 1836. He set about seeking to reach the many slaves and ex-slaves who never attended church, by preaching on the Grand Parade. His preaching met with a violent response and Hodgson started raising funds for the erection of a church where he could preach without disturbance.

The Wesleyan Church in Burg Street gradually felt the need for a larger church and in 1875 purchased the site on which the Metropolitan Church now stands for £1 850. The church was built under the supervision of Charles Freeman (architect) and TJC Ingelesby (builder) in 1878/79 at a cost of £17 700 and opened on 12 November 1879.

In the tower of the church is a massive bell weighing three-and-a-half tons. For safety reasons it has not pealed since the Jubilee of Queen Victoria in 1887. It was silenced because, when it rang, it shook the foundation stones of the Church and surrounding buildings and consequently threatened their structure. It is now known as the “Silent Bell”. The “Silent Bell” rang very briefly on 1 August 2020 during renovations!

The church was attended by many prominent citizens of Cape Town and was famous for its fine preachers and outstanding choirs. The Rev. Ernest Titcomb conducted the first radio broadcast of a church service in South Africa from the Metropolitan Church in 1928 and large crowds gathered to hear his fine preaching. Metro (as it was affectionately called) continued to attract large congregations until the 1960s when urban sprawl and other factors began to take their toll and attendance and membership declined. By the late 1980s only a few dozen people attended services.

The Sidney Street church was sold in 1882 and in 1883 a large wine store was purchased on the corner of Buitenkant and Albertus Streets and converted into a place of worship for the congregation.

Buitenkant Street Methodist Church (as it was known) served the people of District Six and was a thriving congregation until District Six was declared a White Group Area in 1966. Thousands of people were forcibly removed from their homes, including most members of the Buitenkant Street congregation. During this time of upheaval the congregation participated in the growing resistance to apartheid and in particular to the destruction of District Six. A Plaque of Shame was mounted on the church building to remind passers-by of the injustice that had taken place. The plaque is still in place and reads: “All who pass by remember with shame the many thousands of people who lived for generations in District Six and other parts of the city, and who were forced by law to leave their homes because of the colour of their skins. Father forgive us.” Despite attempts to break the spirit of the people through forced removals, detention and harassment, the congregation continued to commute from the suburbs to Buitenkant Street on Sundays and a lively congregation of more than 100 people still worshipped regularly in the late 1980s. The congregation never lost its passion for caring for people, and in 1976 the Stepping Stones Children’s Centre was started to cater for the children of working parents. In later years the church was a venue for many anti-apartheid meetings.

These two congregations, although hewn from the same rock and with ancestors who had worshipped together in the early days of Methodism, maintained their separate witness until 1988 when they decided to amalgamate and form the Central Methodist Mission. This commitment to be obedient to God’s call to unity has borne much fruit, and today a vibrant congregation with more than 200 members worship at the church on Greenmarket Square. The Buitenkant Street church accommodates Stepping Stones Children’s Centre and the District Six Museum. 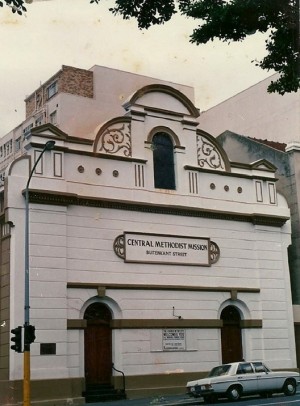 Apart from worship services, both Buitenkant Street Church and (since 1988) the church on Greenmarket Square have been venues for protest and other community events. Many regarded Buitenkant Street Church as a place of sanctuary during the turbulent 1980s. Families of detainees and victims of police brutality were offered sanctuary whilst trade unions and other community-based organisations used the venue for public meetings.

In 1990 the Metropolitan Hall hosted the first ANC press conference after the unbanning of the organisation. Protest meetings were held in the church on a regular basis until 1994 and large crowds gathered to hear speakers such as Nelson Mandela and Thabo Mbeki.

In 1994 the church hosted the launch of the Gun Free South Africa campaign where many children handed in their toy guns as a sign of their commitment to the campaign. CMM also hosted the World Methodist Council Peace Award Ceremony for Nelson Mandela in September 2000.

All of this has happened as a result of the church’s commitment to seek to be relevant to the issues of the day. Our church buildings are places that ring with the sound of people praising Jesus Christ, but also places where people can find sanctuary and encouragement to relate their faith to the challenges of the day.

Additional information on the (Wesleyan) Methodist Church in South Africa can be found on this website.

The first minister of the Methodist Church in Cape Town and the founder of South African Methodism, The Rev. Barnabas Shaw, arrived in Cape Town on 14 April 1816.

Ministers of the Methodist Church in Barrack Street

Ministers of the Wesleyan Church in Burg Street

Ministers of the Metropolitan Church