The SA Navy is set to buy new torpedoes for its submarines, despite it battling to keep its standard fleet operational. According to a report in the Sunday Times, Armscor has confirmed plans to buy a new torpedo system for Heroine-class submarines. The new torpedoes are said to cost up to R60 million each. Industry experts told the Sunday Times that South Africa does not need new torpedoes. Worldwide, there have been only three torpedo engagements since World War 2.

One of the great lies that the world is ever tempted to swallow (and swallow it does) is that violence can be good, righteous and sacred and therefore necessary. It is this lie that Jesus – the Truth – came to set us free from, yet we refuse to be released and thus remain willing prisoners ever-protective of our chains.

And if not Jesus, then one would think that the history of violence’s horror would have brought us to our senses, but alas we overwhelmingly continue to believe that our violence is morally good while the violence of those against us is morally evil. We rage about “their” violence but are blind to our violence. Our “good cause” is what blinds us. Ours is a righteous violence … but not for the family of those we kill … for them it’s the soil of suffering that justifies the planting of the seeds of revenge. This deathly logic plays itself out daily in a million different ways: gang violence; gender based violence; police brutality and war.

Last Saturday a huge truck bomb killed over 300 people in Mogadishu, Somalia. This was done in retaliation to one of the many raids by local troops and US special forces in which countless civilians have been killed over many years in a never-ending cycle of violence.

A recent United Nations study found that in “a majority of cases, state action appears to be the primary factor finally pushing individuals into violent extremism in Africa”. Of more than 500 former members of militant organisations interviewed for the report, 71% pointed to “government action”, including “killing of a family member or friend” or “arrest of a family member or friend” as the incident that prompted them to join a group.

And while we lament the violence, we forget that we have supported it from the beginning – by refusing to pass laws that prevent it, like banning guns, and by paying for the weapons responsible for it like the SA Navy buying deathly wasteful torpedoes for millions.

When it comes to the cycle of violence in the world the Christian Church has much blood on its hands, not just directly but indirectly in the way we have propagated the false narrative of “sacred violence”. For the idea of “sacred violence” is deeply rooted in interpreting the Crucifixion of Christ as a necessary sacrifice (act of violence) in order for God to save the world. This is a terror-ble lie. Rather the Cross of Christ reveals to us the grace-full truth that God would rather suffer violence than ever perpetrate it.

This picture was painted on a garage door…

Those of you who have attended Manna and Mercy will remember that the first key that we learnt to help us to live out the Scriptures in Christ-Like (life-giving) ways is to ask: “Would Jesus say amen to our interpretation?” or “Would Jesus be pleased if we were to imitate the Word as we understand it?” So for example, Samson may have killed 10 000 Philistines believing it was God who equipped him to do so, but would Jesus (who instructs us to love our enemies) say ‘Amen’ to that behaviour? Surely not, and therefore we should not be imitating Samson in our relationship with any Philistines.

This question: “Would Jesus say amen?” is a simple enough question to ask — but which Jesus are we referring to? You see the question presupposes that we know who Jesus is and what would either please him or trouble him. Our answers will largely be influenced by how we see Jesus’ overall purpose.

For example if we see Jesus’ primary purpose to secure our place in heaven — then it is likely that we are going to interpret his teachings and actions in that light. In this light the parable of the vineyard owner (Matthew 20) who kept employing labourers throughout the day and paid them all the same — would mean that no matter when we give our life to Christ (early or late) we all receive the same reward. In this heavenly light we are blinded to any relevance the parable may have with regard to the payment of a just wage on earth.

There are other “Jesus’”. Jesus the miracle worker who aims to prove the existence of God in whom we are to have faith. Jesus the ethical teacher calling us to live a morally upright life. Jesus the spiritual guru offering us inner peace. Jesus the motivational speaker promising rich rewards for doing things his way. Jesus the doomsday prophet coming to notify us of the end of the world and urgently pleading with us to repent or perish.

This can leave us confused asking: “Would the right Jesus please stand up?” To help us apply this “Jesus test” we need to remember the most important thing about Jesus’ life, namely his death. No doubt this is the reason why the Gospel writers all spend a disproportionate amount of text describing Jesus’ arrest, trial and crucifixion. To help us have “the right Jesus to stand up” we must check whether our understanding of Jesus would give the Roman authorities and religious leaders any cause to have Jesus crucified. Why would the Romans be threatened by someone who promised to get you into heaven if you just believed in him and his heavenly father? Why would they kill him for performing miracles or teaching ethics or promising peace and prosperity. Even announcing the end of the world would not disturb them. In fact, all these “Jesus’” would probably have been welcomed by them because it would have distracted the peasant masses from their oppressive struggles and calmed their desire to revolt against the powers.

So even though there are aspects of truth in all of these pictures of Jesus, none of them even remotely account for his crucifixion and this should make us wary of holding onto any of them too tightly. If the Jesus we are praying to or preaching about was not enough of a threat to get nailed to a cross among criminals, then the odds are we are not speaking about Jesus of Nazareth.

Jesus was crucified because he was a threat to the political power and economic privilege of the ruling classes. Therefore, whenever we interpret Jesus’ words and deeds we must ask how our interpretation threatens the rich and powerful — if it doesn’t, we need to look again and again…

Parables as Subversive Speech, by William R. Herzog II is a book I highly recommend to assist us in interpreting Jesus as a threat to the powers.

Grace in the disturbance, Alan

The following article was written by Rebecca Davis for the Daily Maverick [25/02/2013]. Be warned it is crucifyingly disturbing … which I believe is all the more reason we should read it. Today in our Lenten Learnings we reflected on “Blessed are those who mourn …” Only those who feel can actually mourn and only those who love can actually feel … may God help us love.

While the media (including the Daily Maverick) fed the public appetite for Pistorius-related news over the past two weeks, life continued as normal for many. In South Africa, “life as normal” involves daily violence against women.

The disturbing story of Mido Macia, the 27-year-old Mozambican who died in custody after being dragged through the streets by police, should not come as a surprise. The incident was horrendous and publicly shared on video. But it’s indicative of a police force that rapes and murders instead of serves and protects. By GREG NICOLSON.

Police brutality comes as a surprise? Really? Opinions of Prof. Pierre de Vos, professor of Constitutional Law at the University of Cape Town:

My travels are enriching as always. The paradox of seeing home more clearly the further away I am from home never ceases to surprise me. To enter into the lives of others in different places doing different things fascinates me.

In Belfast you can’t help notice the huge wall murals/paintings that litter the community. Most of them that I saw were by paramilitary organisations vowing never to forget those who have been killed during the “troubles”. They can be quite threatening like this one … 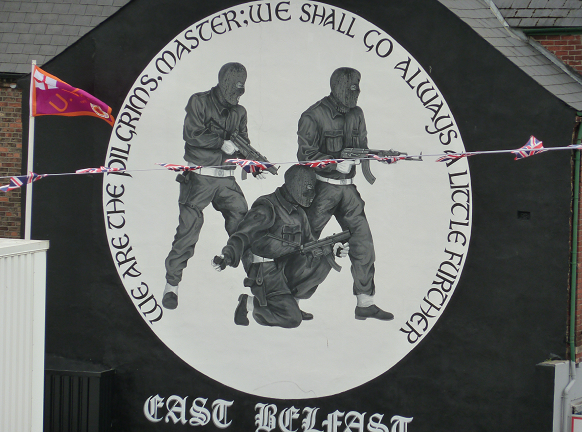 Another — painted adjacent to the East Belfast Mission where I was visiting was different. This one invited our memory to create a new future instead of holding us captive to it. 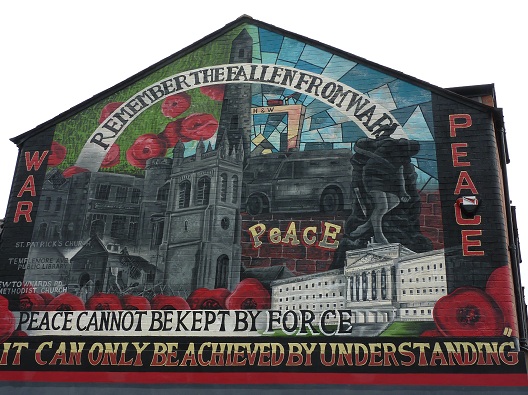 Really when it comes down to it, all of us have to make a choice which wall mural we will honour.

Hi, My name is Alan, and I’m addicted to a way of life that kills…

What are you addicted to?