Lover of the unlovable, we are captives of the world. Recapture our loyalties, not by defeating our will but by drawing it to yours. Seize our spirits, not by forcing us into your grasp but by freeing us from our ways of sin…

Our ears strain for the sound of you, our eyes for the sight of you; our hearts tremble in anticipation of your presence.

Make us your captives Lord. Amen.

Last week while reflecting on the terrifying story of Abraham’s near sacrifice of his son Isaac (Genesis 22) we referred to Rembrandt’s painting of the scene which he did in 1635 (above). This bold 6 feet by 4 feet painting was done by Rembrandt in his prime.

In the painting we see that Isaac takes up the full foreground/half-naked/pale in the light/stretched open/vulnerable/neck exposed. Abraham’s disproportionately large left hand covers Isaac’s entire face. It doesn’t just cover — it smothers in a life-threatening manner. Abraham looks startled and puzzled by the angel’s “put down” — almost saying to himself “now where did you come from and why are you interrupting me?” The angel catches Abraham just in time. The angel’s left hand is raised signalling “stop” or perhaps even in rebuke “what are you doing harming your boy?” while the other hand has forced Abraham to drop the knife which is left in mid-air. 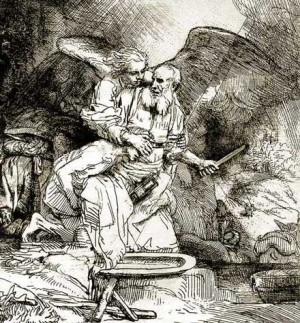 We then contrasted this painting with a small etching (6 inches by 5 inches) that Rembrandt did of the same scene twenty years later. The etching was done after Rembrandt had married, lost three children in infancy, and lost his wife after she gave birth to their only child who lived to adulthood.

Rembrandt’s 1655 interpretation of the scene is vastly different to his early painting. Here we are able to see the love Abraham has for Isaac who is kneeling next to him/head almost on his lap/held close. Abraham gently covers Isaac’s eyes wanting to protect him from seeing what he was about to do. Perhaps most interestingly, Abraham is holding the knife in his left hand — his weaker hand — such is his painful reluctance to go through with the killing. The angel is embracing Abraham — there is no sense of reprimand or force — a comforting hold and you can almost hear the words: “it’s okay … everything is going to be okay … spare the boy”. The angel’s wingspan almost touches the frame and certainly aims to cover the full multitude of Abraham’s anguish. Abraham is relieved but he is also scarred — never to be the same again.

As our life experiences change I hope we too will see the scriptures — especially those most familiar to us — in new ways. May we never hold onto one interpretation so tightly that we cannot receive another.

The following events and services will be streamed live on Facebook at www.facebook.com/capemethodist

Friday 20 May @ 16h00:
The Recognition of Retirees and
Long Service Awards