The African proverb, “When two elephants fight, it is the grass that suffers most,” speaks of the reality of who ends up crushed in the midst of conflict and war. So often, it is the ones Jesus calls us to, the poor. With so much going on in our own context, it is easy to keep our eyes turned inward, but there are conflicts in the world from time to time that create an imperative for the eyes of all the world to turn.

Right now, there is a humanitarian crisis arising the likes of which the world has not witnessed in years.

Mark Lowcock, from the UN names that the famine in Yemen “will not be like the famine that we saw in South Sudan earlier in the year where tens of thousands of people were affected. It will not be like the famine which cost 250,000 people their lives in Somalia in 2011. It will be the largest famine the world has seen for many decades, with millions of victims.” The most tragic reality is that this famine will be man-made.

Yemen is the poorest country in the Middle East and the people there rely on imported food items in order to survive. Because of the ongoing Civil 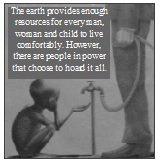 War, air, land, and seaports have been closed. Humanitarian aid cannot reach the people who are in need of it desperately. They have already experienced the worst cholera epidemic in modern history, with 1 million people expected to be affected before the year ends. International donors are sending money in, but “humanitarian groups say any additional international aid is only a stopgap and have called for a political solution to end the war,” says Megan Palin.

Yemen is 6,354 kilometers away. It is too far for many to travel, but not too far to move to the center of our prayers, the center of the universe within our minds that we might be learning all we can about the realities for the people in Yemen, so that we can join the voices of the humanitarian agencies that are calling for the gates to be opened that aid might get in.

There is light enough in the love of God for more than one place in this world. We turn our eyes to the world in order that we might not lose compassion. Sharon Salzberg shares that, “compassion is the strength that rises out of seeing the true nature of suffering in the world. Compassion allows us to bear witness to that suffering, whether it is in ourselves or others without fear; it allows us to name injustice without hesitation, and to act strongly with all the skill at our disposal.”

To think that there are people 6,354 kilometers away on the brink of starvation, for being caught like the grass between elephants, only they are between other humans in conflict, humans who have allowed their hunger and thirst for power to desensitize them to the reality of others right in their midst. It is hard to keep our eyes trained on violence that leads to senseless death, but our common humanity requires it. May we be strengthened to hold in our hearts compassion enough for all the world, that leads us to action in the places where we are drawn to stand.

With you on the journey,
Michelle