An Easter Reflection of Promise

Life goes beyond death, because life is called to life, not death. That is the plan of its creator. But life blossoms into full flower only in those who nurture life here on earth; in those who defend its rights, protect its dignity, and are even willing to accept death in their witness to it. Those who violate life, deprive others of life, and crucify the living, will remain seeds that fail to take root, buds that fail to open, and cocoons that are forever closed-in upon themselves. Their fate is absolute and total frustration.

All those who die like Jesus, sacrificing their lives out of love for the sake of a more dignified human life, will inherit life in all its fullness. They are like grains of wheat, dying to produce life, being buried in the ground only to break through and grow.

As we continue to mark 20 years of our democracy and begin to digest the election results of the past week, Psalm 23 reminds us of who our true leader is as well as the Divine job description set for all leaders.

To declare “The Lord is my Shepherd” was in those day equivalent to saying: “The Lord is my President/Premier.” Sadly because we have tended to turn to this psalm almost exclusively within the context of a funeral service (due to that hauntingly beautiful line, best heard in the Old King James Version: “Though I walk through the valley of the shadow of death…”) we have lost the political nature of its original intent. 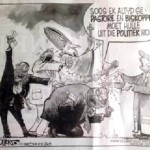 This political use of the term “shepherd” is easily seen in Ezekiel 34 where the prophet accuses the leaders/shepherds of “feeding themselves” while failing to “strengthen the weak, heal the sick, bound the injured and seek out the lost”.

If the psalmist were asked: “So who should I vote for?” the answer would have been clear: “Vote for the Lord!” Meaning, make sure your ultimate loyalty, trust and obedience is for the Lord’s ways. To vote for the Lord is to vote with the vulnerable widow, orphan and foreigner in our hearts. It is to vote for good news for the poor and a deep love for those considered to be least among us.

Therefore a leader’s first task is to prevent people living in ‘want’. In other words a leader must make sure that people have enough to live on — providing food (green pastures) and water (still streams) and education (right paths, rod and staff). Conversely the psalm is a challenge to those of us who live with more than enough. And if we don’t think we are one of those living opulent lives — then maybe Mr Wesley can help us with a little perspective. Wesley said: “…when you are laying out that money in costly apparel which you could have otherwise spared for the poor, you thereby deprive them of what God, the proprietor of all, had lodged in your hands for their use. If so, what you put upon yourself, you are, in effect tearing from the back of the naked; so the costly and delicate food which you eat, you are snatching from the mouth of the hungry.”

Dare we still vote for the Lord? The poor are praying that we do.

Give us courage to vote with our lives, O Lord.