We know of Kilimanjaro in Tanzania – the highest summit in Africa, but have you heard of Rwenzori Mountain? I hadn’t until this week. It is Africa’s third highest summit and is situated on Uganda’s western border.

Within its shadow is the very poor and remote community of Kasese. Kasese is strung out between three national parks and dwarfed by Rwenzori Mountain. The mountain is capped with snow all year round and very significant to the Kesese people. So much so that they call themselves Banyarwenzururu i.e. people of the snow. (Banyarwen = people, Nzururu = snow)

The growing numbers of people in the village and their reliance on biomass and kerosene for cooking have been putting strain on the conservation area. They could see that, but what could they do? They don’t have electricity, because it was not feasible for the power companies in Uganda to supply them. Who would pay for the infrastructure and service especially with many household incomes literally being zero?

This was until the snow cap on their mountain started melting. This was very serious. With the snow gone they would lose their identity. So they decided to implement a plan for their area to become 100% Renewable. They created a community-owned Renewable Energy Power business and connected people in the village to the power grid. For remote areas they got funding from the WWF for standalone Solar Power systems. They got enough money for 4,000. They bought the systems and the community learnt to install it themselves. Then they charged the people a small fee every month similar to what they would have paid for kerosene. Now they have money to roll out another 17,000. 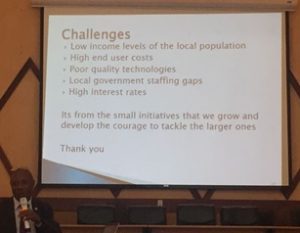 They now have LED streetlights, replacing the lamps they had and saving 50% in energy costs. All of this has created employment. They are planting trees, growing food through-out the year, and a host of other activities. Their case study is bringing people from all over the world to see what they are doing. By 2020 they want no more smoke hanging over the city. The mayor of Kasese (Godfrey Baluku Kabbyanga Kime) reminds the community and those from around the world who come to learn: “It’s from the small initiatives that we grow and develop the courage to tackle the larger ones”.

There are three lessons I learn from this: