At Pentecost, the church celebrates the coming of the Spirit – the outpouring of the sudden power of God to transform a wounded and disillusioned band of stragglers into a community that changed the world.

I encourage you to observe Ramadan this year — or if you are unable to observe the entire month then choose a day or two per week. I encourage you to join your local Mosque for prayers and the joy of breaking fast together. In this way we affirm the faith tradition of others which is so important in today’s world where different religions are often a source of division and conflict in society.

To participate in another’s faith tradition on their terms is to do to others as we would have them do to us. It is to affirm their tradition as a means of God’s grace. We must always remember that the Christian faith does not have a monopoly on God’s grace. I firmly believe that we have so much to learn about the discipline of prayer and fasting from our Muslim faith family that we will be the richer for this experience.

The Holy month of Ramadan begins on 29 June. The fast from water, food and sex begins from sunlight (Sehri 06:18) until sunset (Iftaar 17:50). These times will get earlier (Sehri) and later (Iftaar) as the month progresses. By the last day of Ramadan Sehri is at 06:10 and Iftaar is at 18:06.

My hope is that during our fast we will grow in compassion and mercy for those who are hungry on a daily basis — those who are forced to fast due to poverty. My hope is that during Ramadan, we will have a heightened concern for the well-being of the community as we make more time for prayer and deeper devotions and courageous acts of compassion and justice.

Abstention for long hours can be very hard physically and spiritually. However, by the end of the long month you should feel cleansed and with a renewed spirit. Ramadan is an ideal time to break bad habits, to reflect on one’s personality and character — just as we are encouraged to do during Lent. Those who fast but make no change to their lives except delaying a meal cannot really expect to become any different in their behaviour during, or after Ramadan. In many ways, this is a wasted fast.

I invite you to journey through Ramadan with two passages of Scripture. May these Scriptures be for us a window through which we can see and reflect on our experience. Every morning and evening let us read Isaiah 58 and Matthew 2:1-11.

Strength for the fast!

A couple of weeks ago Pope Francis visited Israel/Palestine. As one would expect he had a tightly managed itinerary with many “minders”. He made many stops at both Palestinian and Israeli sites. He prayed at the western wall of the temple like other popes before him. 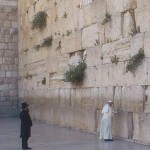 The most memorable image of his trip was his unplanned stop at another wall. The wall that divides Bethlehem and which carves up Palestinian communities into ghettos.

Bethlehem-based photojournalist Kelly Lynn has written about Mohammed Abu Srour, the young Palestinian activist who sprayed the graffiti message in advance of the Pope’s visit. Apparently, Mohammed and his comrades played an extensive game of cat and mouse with IDF soldiers and PA security before he was able to successfully spray his direct message just in time for the Pope’s arrival:

A few minutes before Pope Francis arrived, spray cans surfaced and activists from the previous day’s 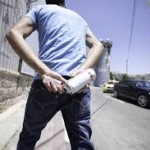 action began to paint over the newly, newly-painted wall and gate. Mohammed climbed his friend’s shoulders and because of the frenzy, security personnel could not be bothered. “They painted all of the wall silver, you couldn’t see anything we did yesterday, so we decided to write again for the Pope. We want him to pay attention to our issues as normal Palestinians,” explained Abu Srour.

And then, in a glass-covered pristine white pick-up truck, he came. 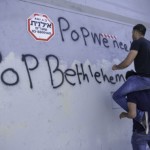 “I didn’t expect the Pope to go down and start to read the sentences and meet the children and people there. He shocked us,” said Abu Srour.

I admire the persistent tenacity of the shoulder-climbing-spray-painting activists. And I just love the fact that the Pope stopped and prayed at this “unholy” wall – enabling his bowed head to be neatly framed by the activist’s pointed message: “Pope, we need some 1 to speak about justice” and “Pope, Bethlehem look like the Warsaw ghetto.”.

From this parable-like event I am reminded that … 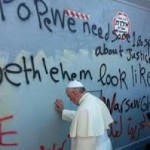