This Sunday the service will be a play – Ubuze Bam –
a worship experience with a difference.

As a result there will be no recorded sermon.

One Reviewer of Ubuze Bam had this to say …

“Literally translated as ‘my nakedness’, Ubuze Bam is a theatrical interpretation of the life events of four ex-inmates, all of whom have spent 10 years or more behind bars.

Theatre Arts Admin Collective has joined arms with the programme Young in Prison to create this searingly honest piece in which the performers – Lazola, Eric, Ntsika and Bongani – have spent just over a month rehearsing under the direction of Thando Doni. Prior to this performance, the young men had never acted, let alone witnessed a theatre production. 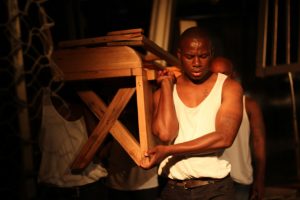 Young in Prison is a rehabilitation initiative which assists former inmates to transition back into society. The theory is that many ex-cons can learn a number of life-skills which will positively impact their behaviour, and thus reduce the reoffending rate. Originally, the project was meant to engage with youth and young adults who were still in prison, but due to the rat infestation and quarantine at Pollsmoor, the current post-release programme was conceptualised.

The initiative focuses on revisiting the past in a healthy and productive environment. Through a focused, five week-long process, these four participants have been encouraged to engage with and creatively express their stories, and have learnt more about what it means to a powerful piece of art also helps to break down their own negative perception of themselves. And this was made so evident when, as the show ended and the lights went out, above the cheering of the crowd we could hear the actors shouting celebrations of victory from behind the scenes. 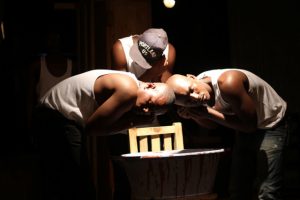 As a prologue, the young men explain that the play is “about me and my friends; it’s our secrets”. And the resonating truth of that statement was only fully felt after the show was over. When meeting people, we often only reveal the best parts of ourselves for fear of being judged or ridiculed. So to find myself easily conversing with these men – just minutes after they been describing the violent crimes they had committed – was revelatory. I didn’t see former prisoners; I saw four lionhearted men who are breaking society’s mould which states that you have to wear a mask in order to be accepted.

Despite their lack of experience on a stage, the performance from the young men was deeply emotional and often chilling in its rawness. The level of bravery needed to admit their crimes and their failures and to show their vulnerability was awe-inspiring. While the show itself is artistic, impactful and astonishingly truthful, the greatest significance lies in the road these men have taken.

The heart behind the performance is something to be reckoned with as these young men undergo a journey of breaking chains in every sense.”
Reviewer: Public Spirit

To find out more and to support/donate:
Young in Prison | www.younginprison.org.za

The Methodist Church of Southern Africa joins the South African Council of Churches in expressing our shock at what appears to be calculated “intrigue” in the goings on catalogued in the “State of Capture” report.

We acknowledge that the report is preliminary and inconclusive and that the Public Protector has recommended further investigation by a Judicial Commission of Enquiry. We support this call and hope that due processes will be expedited post haste. We find it very unfortunate that as mentioned in the report, the position of the Head of State is becoming increasingly untenable.

We call on all Methodists to commit to prayer and fasting for the nation of South Africa and all creation. We ask that church bells throughout South Africa be rung at 12 noon for 7 days from Sunday 13 November, culminating in concerted prayer on Sunday 20 November 2016. We will, at this time, also pray for President Zuma and all those implicated in the report to interrogate their consciences and do the honourable thing by voluntarily stepping down for the good of the country should they be founding wanting. We acknowledge that in the event of their resignations, this will not dig us out of the political and economic quagmire we find ourselves in today but it will send out a clear signal to a commitment to a new dawn of statesmanship and political accountability.

We further ask all our members to engage in courageous conversations as we pray and seek to discern God’s will for the country, irrespective of our narrow and partisan political persuasions.