Last weekend I was attending the Methodist Heritage Indaba in Durban. People from all over Southern Africa were invited to tell the story of Methodism in their area. It was an amazing history lesson that lasted three full days. (Historians can talk!) I was inspired by the courage of the early Methodists. I reckon we could move mountains if we had just a mustard-seed-amount of their courage!

Gandhi was barred from entering the church door with the words: “Where do you think you’re going, kaffir?”

In a speech to Women Missionaries on 28 July 1925, Gandhi said, “… although I am myself not a Christian, as an humble student of the Bible, who approaches it with faith and reverence, I wish respectfully to place before you the essence of the Sermon on the Mount … There are thousands of men and women today who, though they may not have heard about the Bible or Jesus, have more faith and are more god fearing than Christians who know the Bible, and who talk of its Ten Commandments…”

To a Christian missionary Gandhi once said, “To live the Gospel is the most effective way, most effective in the beginning, in the middle and in the end. … Not just preach but live the life according to the light … If, therefore, you go on serving people and ask them also to serve, they would understand. But you quote instead John 3:16 and ask them to believe it and that has no appeal to me, and I am sure people will not understand it. The Gospel will be more powerful when practiced and preached.”

“A rose does not need to preach. It simply spreads its fragrance. The fragrance is its own sermon the fragrance of religious and spiritual life is much finer and subtler than that of the rose.” 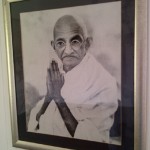 Gandhi’s advice to Christians, “First, I would suggest that all Christians, missionaries begin to live more like Jesus Christ. Second, practice it without adulterating it or toning it down. Third, emphasise love and make it your working force, for love is central in Christianity. Fourth, study the non-Christian religions more sympathetically to find the good that is within them, in order to have a more sympathetic approach to the people.”