At Pentecost, the church celebrates the coming of the Spirit — the outpouring of the sudden power of God to transform a wounded and disillusioned band of stragglers into a community that changed the world.

This past week we witnessed the cruel eviction of some 200 families from the informal settlement in Lwandle. Who was actually responsible for the eviction or whether it was “legal or not” is not the issue. The timing and the manner in which it was conducted was neither just nor merciful and therefore it was anti-Christ-like.

We are collecting food, clothes, blankets, toiletries, baby food and the like. If you would like to drop them off here at CMM during the week we will make sure that they are delivered with your love. 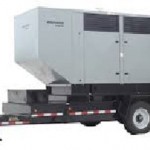 On 18 May at the time we were getting ready for our morning service a driver hit a water pipe in the basement garage of Newspaper House around the corner from us. With nowhere to run the water quickly rose — reaching a height of 1.5 m in some areas — that is up to the windows of some cars! As a result of the “flood” an electrical grid was “knocked out”. And since 19 May until 3 June about six of these giant generators have been keeping the lights on (see insert). For nearly three weeks these generators have been rumbling noisily 24/7. This has provoked many thoughts within me — most of which have not been polite, especially as the sleepless nights add up.

But now I think it’s good to have had the non-stop rumbling to be reminded of our incessant consumption of fossil fuels that we rely on to sustain our unsustainable modern lives. The truth of the creation groaning in agony (Romans 8:22) is too often hidden within the silence of electrical currents allowing us to pretend that our way of life is less harmful than it is. So I began to hear the assaulting noise of the generators as the earth’s cry in response to our assaulting extraction of coal from which most of our power supply comes. I fear we will only stop destroying the planet when we are personally disturbed.

As I write this I have just received an invitation to sign an online petition calling the new Minister of Mineral Resources to scrap the possibility of a coal mine being developed right on the borders of the spectacular Hluhluwe-iMfolozi Park — the world’s greatest rhino sanctuary. The humbling truth is that it is easier to sign an online petition than to reduce my own dependency on fossil fuels. In my mind I ask: Where does one even begin and what difference will it make? But this is the challenge that should be occupying all of us.