Grace and peace to you …
At Artscape last Sunday afternoon I had the privilege of attending a function to celebrate Cecil Jacobs’ life of dance. Cecil has taught dance (and a host of school subjects) in the garage and lounge of his and Brenda’s home for the past 50 years. Amazing! Not for money or for show, but for the love of the art of human movement, rhythm and discipline. All the while trusting it would be a means of grace within the lives of his young students. Cecil wouldn’t only teach his students to balance perfectly on their toes, but also to work out how to balance their living surrounded by much imbalance in their homes and communities. In a world that sometimes seems to be spinning out of control Cecil would help his students to pirouette with finesse, reminding them that they themselves can be the beauty among the chaos. 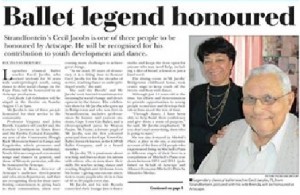 I was reminded again that Resurrection happens in many different ways. The pushing back of death by new life sometimes takes three days but sometimes it takes a generation. Cecil himself was never allowed to perform on the stage of the then Nico Malan Theatre Centre (renamed Artscape in 2001) but many of his students have done so – dancing to the new drum beat of democracy.

We gathered to honour Cecil on reaching this jubilee milestone, but in fact the real jubilee (biblically speaking) is how through his teaching he has liberated so many to reach a deeper and more meaningful life over the years. Jubilee is all about liberation. We are called to be a Jubilee people and a Jubilee Church.

Thank you Cecil and Brenda for your ministry. You have reminded me of Frederich Beuchner’s glorious definition of vocation: “The place God calls you to is the place where your deep gladness and the world’s deep hunger meet.”