GRACE AND PEACE TO YOU…

On hearing of Robin Williams’ death this past week I was catapulted back in time to many a movie which had brought me to tears. Tears of laughter yes, but mostly tears resulting from being touched in the most tender of places — where dreams and fears mingle unguarded. Williams’ humour was more about redemption than about being funny. With every turn of phrase he sought to redeem our pain, tragedy and loss.

There are five movies that stand out for me: Dead Poets’ Society; Good Will Hunting; Good Morning Vietnam; Patch Adams and the Fisher King. In each Williams plays the part of a wounded healer or redeemer. He was a vulnerable-clownish-rulebreaking-crackpot-Christ figure.

In Dead Poets’ Society he teaches students to think for themselves and to pursue their deepest passions outside the narrow scripts of their pushy parents or the stuck-up establishment. “We don’t read and write poetry because it’s cute. We read and write poetry because we are members of the human race. And the human race is filled with passion. And medicine, law, business, engineering, these are noble pursuits and necessary to sustain life. But poetry, beauty, romance, love, these are what we stay alive for.” He got them to stand on their desks to view the world from a different perspective and to seize the day because “believe it or not, each and every one of us in this room is one day going to stop breathing, turn cold and die.” 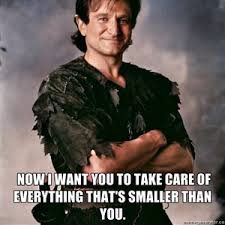 In Good Will Hunting he mentored Will through his fears to face himself: “You think I know the first thing about how hard your life has been, how you feel, who you are, because I read Oliver Twist? Does that encapsulate you? Personally… I don’t give a [expletive] about all that, because you know what, I can’t learn anything from you, I can’t read in some [expletive] book. Unless you want to talk about you, who you are. Then I’m fascinated. I’m in. But you don’t want to do that do you sport? You’re terrified of what you might say. Your move, chief.” And he helped Will risk the delight of love: “You’ll never have that kind of relationship in a world where you’re afraid to take the first step because all you see is every negative thing 10 miles down the road.” … “You don’t know about real loss because it only occurs when you’ve loved something more than you love yourself. I doubt you’ve ever dared to love anybody that much … “

In Patch Adams he spoke boldly to the medical profession: “You treat a disease, you win, you lose. You treat a person, I guarantee you, you’ll win, no matter what the outcome.” And he challenged our views on death. “What’s wrong with death sir? What are we so mortally afraid of? Why can’t we treat death with a certain amount of humanity and dignity, and decency, and God forbid, maybe even humor. Death is not the enemy gentlemen. If we’re going to fight a disease, let’s fight one of the most terrible diseases of all, indifference.”

In Good Morning Vietnam we were reminded that the first casualty in war is always the truth: 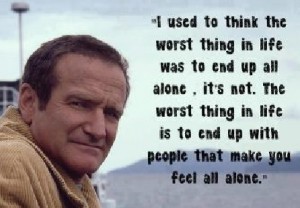 In the profoundly brilliant Fisher King, guilt ridden radio DJ (Jeff Bridges) and grief stricken homeless person (Robin Williams) meet each other within the surprising embrace of friendship and forgiveness. In the end both are healed to risk loving and being loved again.

I give thank for Robin Williams modern portrayals of the gospel.