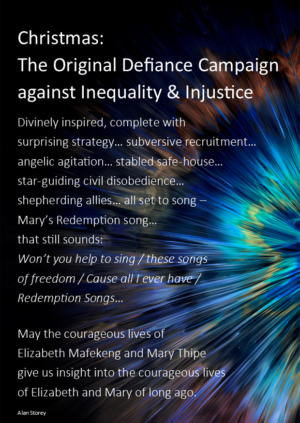 On 26 June 1952 the Defiance Campaign against unjust laws in SA was launched. Until then in South Africa it was the largest non-violent resistance campaign with more than 8 000 people going to jail for defying apartheid laws and regulations.

I, the undersigned, Volunteer of the National Volunteer Corps, do hereby solemnly pledge and bind myself … to participate fully and without reservations to the best of my ability in the Campaign for the Defiance of Unjust Laws. … “

Elizabeth Mafekeng and Mary Thipe were two Defiance Campaign Volunteers. Elizabeth Mafekeng was born in 1918 in Tarkastad. Living conditions in her birthplace forced her to leave for Paarl in the early 1930s. Mafekeng left school at the age of 15 to support the family. Her first job was at a “canning factory where she cleaned fruit and vegetables for 75 cents a week”. She married a fellow factory worker in 1941 and joined the trade union in the same year. She became a shop steward and then served, between 1954 and 1959 “as President of the African Food and Canning Workers Union (AFCWU) and branch secretary in Paarl”. Mafekeng was known as “Rocky” among the workers in Paarl. A striking woman, she always began ”her speeches with a song or two, singing in a clear, rich and well-organised voice”. Her speeches were “fiery, militant and witty.”

In 1952 Mafekeng participated in the Defiance Campaign and the South African Congress Trade Unions’ (SACTU’s) 1957 ‘Pound a Day’ Campaign. In 1955, she skipped the country without legal papers to represent the Food Workers Union at a trade union conference held in Sofia, Bulgaria. She was met with police brutality upon her return. In 1959, the Government banished her from Paarl, to a remote government farm in the Kuruman district. Her banishment papers said it was ‘injurious for the peace, order and good administration of Natives in the district of Paarl’ if Mrs Mafekeng remained there. She was given five days (later extended to twelve) to say goodbye to her family, make arrangements for their care, (and) wind up her work … There was, of course, no trial, no public hearing and no possibility of appeal.

She refused to take her 11 children to that desolate place. On the night of her deportation the union leadership organised a large number of workers to bid her a safe journey. She got onto a train and started waving farewell and then quietly walked through two coaches and jumped off the train unnoticed. Rather than being banished to Southey and to “a future of nothingness,” Mafekeng fled to Lesotho with her two-month old baby, Uhuru, and sought refuge at a Roman Catholic Mission at Makhaleng. She was granted asylum and lived in a two-room home with her nine children in the small village of Mafeteng. With the unbanning of the liberation movements in 1990, she returned to Paarl. The FCWU built her a home in Mbekweni Township in Paarl. Elizabeth Mafekeng died on 28 May 2009, at the age of 90, due to ill health. 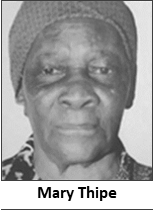 Mary Thipe was born in 1917 in a village called Ramhlakoane in the Matatiele district. She later moved to Umkhumbane and joined the liberation struggle in 1952, the year of the Defiance Campaign. She was arrested, detained and banned for five years for her political activities.

Thipe took part in the 1959 Potato Boycott – a consumer boycott to end the slave-like conditions of farm labourers in Bethal (Mpumalanga). She was involved in the Cato Manor Beer Hall March in 1960 – a women-led national campaign of boycotting municipal beer halls because their men were drinking sorghum beer while their children and wives starved.

Her activities attracted the wrath of the police. She was put under house arrest for 10 years which meant she could not attend church services, funeral services of her loved ones and was not allowed to be in the company of more than three people.

Every Monday morning, Thipe was required to report at the Cato Manor police station. This did not stop the security branch from harassing her even in her house arrest.

She had trained her children that each time police came in the middle of the night, they would wake up and stand behind her. She had also trained them to look at the police in the eye and not flinch. When one of her grandsons went into exile, the police intensified their terror on Thipe and her family. When the police threatened to find her grandson and kill him, she retorted by requesting that they bring his head back to her. She refused to show fear and flinch at their threats. In 1986 the police used a gang which was known as the A-team to burn Thipe’s house down. Thipe died of a stroke but not before voting for what would be her first and last time in 1994.

All information about Elizabeth Mafekeng and Mary Thipe are from South African History Online.

Now, long before Elizabeth Mafekeng and Mary Thipe volunteered to solemnly pledge and bind themselves to participate fully and without reservations to the best of their ability in the Campaign for the Defiance of Unjust Laws, there were two others who shared their spirit of defiance, as well as their first names. The Gospels tell us that the Spirit of God had come upon Elizabeth and Mary, and what is the Spirit of God if it is not the Spirit of defiance against all that is unjust in the world?

Christmas is the original Defiance Campaign against inequality and injustice: Divinely inspired, complete with surprising strategy… subversive recruitment… angelic agitation… stabled safe-house… star-guiding civil dis-obedience… shepherding allies… all set to song – Mary’s Redemption song… that still sounds: Won’t you help to sing / these songs of freedom / Cause all I ever have / Redemption Songs…