Oh God, let something essential happen to me, something more than interesting or entertaining or thoughtful.

Oh God, let something essential happen to me, something awesome, something real. Speak to my condition, Lord and change me somewhere inside where it matters, a change that will burn and tremble and heal and explode me into tears or laughter or love that throbs or screams or keeps a terrible, cleansing silence and dares the dangerous deeds. Let something happen which is my real self, Oh God. Amen.
[Ted Loder]

In preparation for Holy Week I have been re-reading some works of Dietrich Bonhoeffer — the German Lutheran pastor who stood fearlessly against Nazi rule. He was jailed and finally executed on 9th April 1945 at the age of 39 just 23 days before the Nazi’s surrendered.

“There is no way to peace along the way of safety. For peace must be dared, it is itself the great venture and can never be safe. Peace is the opposite of security. To demand guarantees is to want to protect oneself. Peace means giving oneself completely to God’s commandment, wanting no security, but in faith and obedience laying the destiny of the nations in the hand of Almighty God, not trying to direct it for selfish purposes. Battles are won, not with weapons, but with God. They are won when the way leads to the cross.” 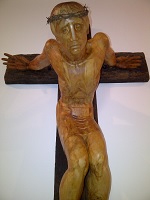 “There are so many experiences and disappointments that drive sensitive people toward nihilism and resignation. That is why it is good to learn early that suffering and God are not contradictions, but rather a necessary unity. For me, the idea that it is really God who suffers has always been one of the most persuasive teachings of Christianity. I believe that God is closer to suffering than to happiness, and that finding God in this way brings peace and repose and a strong, courageous heart.”

“Christians stand by God in God’s suffering” — this is a Christian’s distinguishing character. This is what Holy Week teaches us to do. See you in the week.