Sophie Joans is a theatre-maker, comedian and producer, who hopes to make humans connect with each other through laughter and storytelling. Some of her notable performances include: The Flower Hunters (NAF 2021) and her ukulele stand-up comedy act which she has toured around the country. She founded @Scenes_on_Screens – a virtual theatre on Instagram in response to lockdown. She has recently joined the team of writers at The Regular Post, a satirical news show.

Phillip Dikotla is an incomparable stand-up comedian, with a boundless, thought-provoking, insightful, and laughter-lashing tongue. The funniest and most important upcoming comedy voice in South African comedy today with a background as a multiple award winning actor and writer.

Arlene Petersen is a local comedienne hailing from Lavender Hill who started her career as an MC, mostly at community church events. She has performed all around Cape Town and even in the Mother City Comedy Festival 2020 just before everything shut down. She has broadened her career by tapping into the acting, online entertainment and plus size modelling industry, and stand-up comedy has become a leg to stand on when auditioning for various industry opportunities. Not only is she funny, she can cook too. As a two time national TV cooking show champion she is convinced that food and laughter is the best medicine.

Neo Masiko was born in Johannesburg 22 years ago. He has always wanted to be a singer since the 3rd grade but sadly puberty had other plans. Neo graduated in April 2021 with a bachelor degree in live performance from afda. Turns out he is actually good at acting. His whole life he had known that he wanted to be an artist but didn’t know what type of artist he’d be. Neo loves music, comedy and drama and by drama he means the “real house wives “. Neo enjoys writing poetry and songs and one day he hopes to start a music career. All he wants is to heal people through art.

This year is no different – Alan cycles, generous people donate (no amount too small or too big) and 100% of every cent received is given to Stepping Stones. Your donation enables all the staff members to continue to devote their love, time and energy to the approximately 100 children who attend the school, some of whom come from challenging backgrounds.

One of Stepping Stones’ founding principles in 1976 was not to classify children according to race, and so throughout the apartheid years the school received no funding from the State and depended solely on the generosity of the community and it is still standing strong! So we know the world is full of very generous people.

Banking details are on the pamphlet below as well as on our website.

Thank you for your generosity. 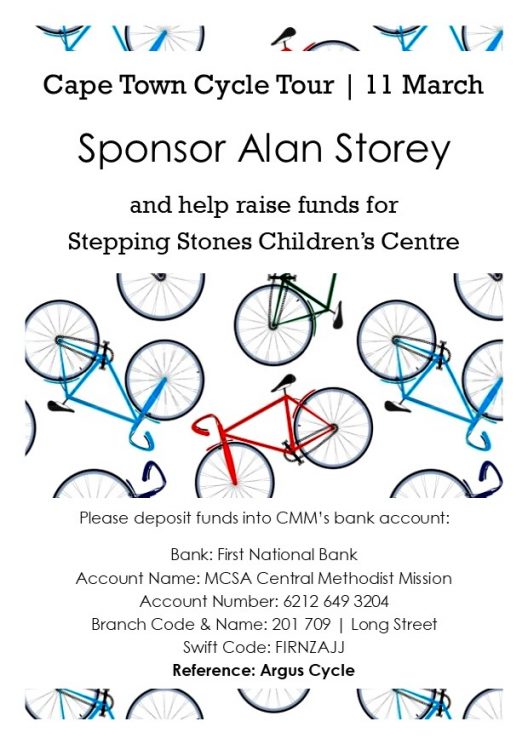