On Palm Sunday we witness Jesus perform some seriously prophetic (truth revealing) street theatre that hilariously screams for everyone to hear: “The Emperor is not wearing any clothes”. This prophetic tradition is continued by an amazingly imaginative Rabbi Arthur Waskow.

Last Sunday afternoon, about 150 people met – seriously and joyously – at the West End Synagogue in Manhattan for a religious service, followed by an hour of street theatre – both aimed in the spirit of Passover and Palm Sunday, at the Carbon Pharaohs of our generation, especially the Koch Brothers. 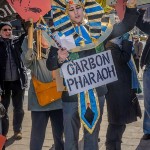 The street theatre took place near and on Lincoln Center, at the David Koch Theatre. It featured a dramatic collision between a figure costumed as Pharaoh, traveling with a Pyramid of Power and followed by a gaggle of people carrying oil cans, coal bags, etc. 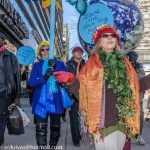 the Prophet Miriam as Mother Earth, traveling with a large globe and followed by a band of people with windmills, solar panels, and earth-friendly banners.

Picture of Cross of Nails: With gratitude and recognition to http://dogbreathsoup.deviantart.com/