Hope for the Flowers was one of the first books I remember my mom giving to me. I have never stopped reading it and never stopped trusting in its truth. It could have been called The Gospel according to Yellow and Stripe. 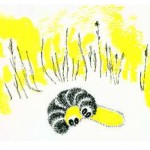 It is about two caterpillars named Yellow and Stripe. Yellow and Stripe were in love with each other. They decided that there was more to life than getting to the top of the caterpillar pile and decided to journey in a new direction. To live for each other instead of themselves and to focus on loving. For caterpillars this meant that they did a lot of hugging – well actually caterpillars don’t hug, they curl. They really are good curlers!

I won’t spoil the whole story for you … but just to say at some point they had to make a big decision. It was full of risk. The decision terrified them both. They had to give up the only life they knew in the hope of a new life they barely thought possible and yet somehow they could not give up the belief that it was possible. They had to die … in order to live more fully — yes even fly. 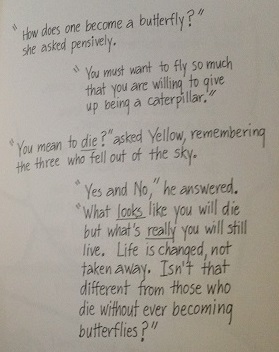 For me this is the most beautiful and clear picture of the new life that Jesus invites us into when he invites us to walk in his ways. It is a huge risk and it is terrifying. It involves dying to oneself and giving ourselves to each other in love. Just the idea bubbles with promise within my belly — how about yours?

In today’s Covenant Service we are invited to risk giving up our lives for Love’s sake. When we do we die. When we do we are re-born. When we do, we soar like on the wings of eagles … or is it butterflies?

“I shall look at the world through tears.
Perhaps I shall see things that dry-eyed I could not see.
The tears streamed down, and I let them flow as freely as they would,
making of them a pillow for my heart. On them it rested.”