Look the young woman is with child… Isaiah 7

Since Nelson Mandela’s death we have experienced the resurrection of his life in myriads of interviews, op-eds, personal testimonies. From every possible quarter stories are being told and re-told. From politicians, neighbours, family members, sports people, jailors, presidents, priests, lawyers, factory workers, domestic workers, the poor and the rich — all adding a word about the Madiba they met. From every age group and from every cultural orientation — all sharing stories of his greatness, humility, humour, surprise, grace, inspiring presence, firmness, warmth. Seeming contradictions added to the brightness of the truth. A fighter. A forgiver. A father of a new nation. And then the reams and reams of comments — the words about all the words — in response. Forming the richest tapestry of the one we were blessed to share time with on this earth.

Then as now, the people began to tell their stories and it wasn’t long before a rich tapestry of Jesus’ character and what he stood for and why he died and how he lives on began to circulate. Stories complemented stories making a marvelous tapestry of liberating truth that could only be described as miraculous. Editors did amazing work in collating and communicating his core. His fully human core “reflected God’s glory and the exact imprint of God’s very being” [Heb. 1:1-4].

The Gospel writers and editors of old all concluded with the same invitation — do as Jesus did. He has passed on to each of us his Cross (mantle) to carry. Imitate him. Follow him. Seek out his Spirit. Continue his long walk to liberation for all. 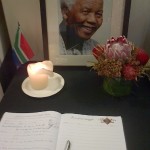 The age where faith communities alone mediated the meaning of memorials for the rest of society is past. Little “shrines” of memory were built in shopping centers, hospitals stadiums, entrance halls to businesses, the lobbies of hotels, etc.