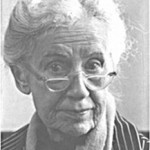 Above is a quote from Maggie Kuhn who dedicated her life to fighting for human rights, social and economic justice, global peace, integration, and an understanding of mental health issues. At age 65 she founded the Gray Panthers — a national organisation dedicated to social justice — specifically against Age Discrimination in the areas of retirement, housing, and health care.

The Secrecy Bill is set to pass through the NCOP by the end of this month and the securocrats have dug in their heels. Yet across the country, there has been a rise of a massive people’s movement to fight for the free flow of information, tackling not the Secrecy Bill but broader threats to our right to know. It’s time to bring it all together.

Starting on Monday 19 November, R2K is hosting a week-long ‘Camp-Out for Openness’ at the gates of Parliament, calling for ‘Free Information! Full Participation! Fair Process!’

The Right 2 Know campaign is bringing together communities and causes from across society who want not only to stop the Secrecy Bill, but fight for broader openness in our society.

Join the Day & Night Camp-Out! There will be workshops, teach-ins, rallies, pickets and even a film festival that will be showing each night at 19h00.

Films will screen outdoors every evening at 19h00 in partnership with the Tri-Continental Film Festival.

Every morning and late afternoon we will be outside the MPs entrance/exit with placards at 08h30 and 16h30.

Monday 19 November: Towards the Right to Know

Friday 23 November: The Right to Communicate

We have the right to know, Alan