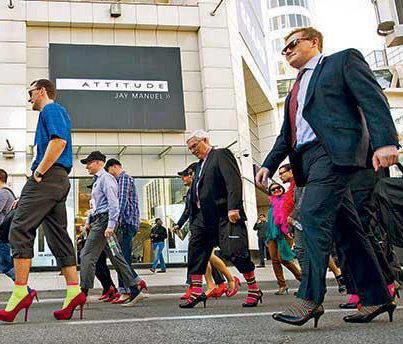 Today we “occupy” Church Street in the most Jesus-like way! We set out a banquet table with an abundance of food to share with the hungry and homeless of this city. Those who are forever told to “move along” will be invited, welcomed and served. It is probably as close as we will ever get to truly sharing Holy Communion. Lord help us to do so with reverence for each other.

And here is the thing — those of us preparing and serving are the really fortunate ones — far more so than those receiving the meal. We are fortunate for the incredible privilege to serve. If we think our service is a “sacrifice” we still have not understood what it means to live life centred around Jesus. Service is a privilege not a sacrifice because we are all born in the image of a Serving God and therefore to serve is to be who we are originally designed to be. To serve is to speak in our mother tongue — though sadly many of us have not learnt to speak it fluently.

It is a privilege not only because we have an opportunity to live out our Godly design, but also because we get to serve Jesus in our midst. Jesus who comes to us hidden in the swollen face and torn feet of the vulnerable. If the Gospels are to be believed we are more likely to meet Jesus out on Church Street than inside this church building.

It is a privilege to live out the teachings of Jesus who told us that when we throw a party we should invite the blind, crippled, deaf and lame. Jesus also instructed us to be sure to invite people who would never be able to return the favour.

Today is not a “once off” event. It is the culmination of a consistency of service shown throughout the year by a dedicated group of people who have provided a meal and an affirming grace for the vulnerable of the city every Sunday lunch time. Thank you for your witness. Alan

The Situation in Khayelitsha

Despite declines nationally in key crime indicators, Khayelitsha has seen an increase in the number of murders, attempted murders and sexual assaults over the past four years. Between April 2011 and March 2012 there were 360 murders in Khayelitsha. During the same period, there were 648 sexual offences. Complaints by organisations prompted the National Police Commissioner to commission a task team to investigate the efficiency of policing in Khayelitsha. The report revealed that the community police forums in Khayelitsha are not operating effectively. At Khayelitsha Police Station, only one vehicle and one officer are assigned to each sector for visible policing; suspects are often held for more than 48 hours without charge – a severe violation of people’s constitutional rights; and police officers also often fail to take witness statements, resulting in cases being thrown out of court.

Given the lack of trust in the police to provide safety and security, some Khayelitsha residents have taken the law into their own hands, resulting in an explosion of vigilante killings – according to the SAPS, 78 such killings were reported between April 2011 and June 2012 in Khayelitsha. Residents explain that because police and the courts are failing their communities, people are taking the law into their own hands to ensure that justice is done. More recently we have witnessed brutal warfare between rival gangs of schoolchildren, resulting in the deaths of a number of young learners and many children not going to school fearful of being caught in the violence.

GOING FORWARD On 13 December 2012, the first hearings will be held in the Cape Town High Court to determine if the SAPS interdict application will be successful. In the build-up to the hearing we will be actively campaigning to raise awareness of the Commission of Inquiry.