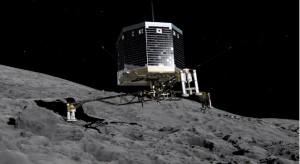 This past week we earthlings managed to catch a ride on the back of a comet. Since blasting off in March 2004, Rosetta and its lander Philae have traveled more than 6 billion kilometres to catch up with the comet, which orbits the sun at speeds up to 135 000 km/h. Touchdown for the lander played out 510 million kilometres from Earth, between the orbits of Mars and Jupiter, on a comet hurtling through space at more than 18 km/s. At so vast a distance, even radio signals travelling at the speed of light take nearly half an hour to travel from Earth to the spacecraft, making real-time control of the landing impossible. Instead, the entire descent was pre-calculated, uploaded and run automatically.

The safe, if precarious, touchdown of the lander gives scientists a unique chance to ride on-board a comet and study from the surface what happens as its activity ramps up as it gets closer to the sun.

The £1 bn ($1.58 bn) Rosetta mission aims to unlock the mysteries of comets, made from ancient material that predates the birth of the solar system. In the data Rosetta and Philae collect, researchers hope to learn more of how the solar system formed and how comets carried water and complex organics to the planets, preparing the stage for life on Earth.

This sort of stuff just astounds me. I am filled with wonder and awe at the logistics and mathematics involved in such a mission. It is also profoundly humbling to be reminded how crazily huge the universe is, and how miniscule we are.

Rabbi Abraham Heschel warned us: “Forfeit your sense of awe and the universe becomes a market place for you.” This is why scientific exploration is so important, namely to expand our vision into the mystery of matter.

As Mathew Fox asks: “How aware are we of the wonders of our own bodies? Consider how, for example, every person has enough blood vessels in them to go around the earth two times (96 000 km worth when extended end-to-end). If we were to extend just one person’s DNA end-to-end it would travel from the earth to the moon and back 100,000 times! Our hearts do the daily work equivalent of lifting a ton five stories high and our bones are literally stronger than steel or reinforced concrete — yet when they break they grow back on their own.”

All this should move us to wonder and praise for the Creator and reverence for the creation. Humility should be our default position towards the planet.

Sadly, “we tear down forests, despoil the soil and the fisheries… and other species — we are destroying ourselves. We are living in the greatest period of destruction of the last 60 million years and the truth must be told: anthropocentric religion contributes to this devastation” says Matthew Fox.

We have been taught not to “worship creation” as divine (pantheism) but in the process we have lost all reverence for God’s handiwork. The pendulum has swung to the opposite end. We unthinkingly cut, exploit, mine and chisel away for profit and apparent progress without counting the actual cost.

I confess that I think God would be more pleased if we worshiped the tree (that cleans the air we breathe) than not. In fact, many of us practice something far worse than pantheism — let’s call it bricktheism — which is the worship of buildings. This is especially true of places of worship. Too often they become places to worship.

May our eyes be opened to the mystery of matter and wonder of creation. Grace, Alan 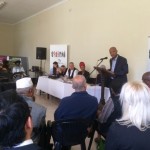 Pastor Xolo Skosanna was elected as the chairperson of the Western Cape Religious Leaders’ Forum this past week.