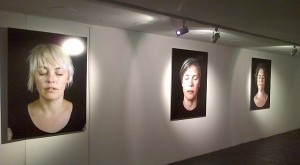 On the First Thursday of the Month the city comes alive at night in a very special way. There is a free concert on Greenmarket Square (in our backyard) as well as around 30 art galleries that open their doors until about 9 p.m. I encourage you next month on 3 October to join this Art Pilgrimage.

You have heard the words from Edmund Burke many times before, “That all it takes for evil to succeed is for good people to do nothing”. It is true. But it is not so simple.

The problem with evil (here broadly defined as that which destroys life) is that it does not always look like evil. Often the evilest evil is presented as good and virtuous, something to be aspired to and sought after. It is very difficult to detect especially when the dominant culture labels it “success” and invites us to pay homage to its achievement. 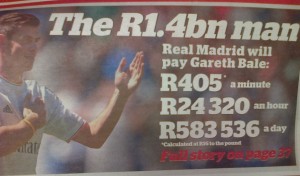 Take for example the transfer fee of +R1.4bn for soccer player Gareth Bale by Real Madrid which is more than half a million Rand a day.

In a world where all life is interdependent on the generous sharing of all other life — this is evil. It is evil because it results in one having too much and many others having too little. Yet this evil is hailed as the pinnacle of success. I am not saying Gareth Bale is evil (well no more than anyone else) rather it is the system that enables such an insanely huge sum of money to be paid to an individual that is evil.

And here is the thing that is really sick about this evil, that the very people who live with too little are the ones who support this kind of system, not intentionally, but by crowding around TV’s with sponsor’s drinks in hand to catch a glimpse of the “beautiful game”. And any suggestion to boycott watching soccer would probably unite opposing fans in seeking one’s blood.

May our eyes be opened to evil in our midst and may God give us the courage to admit where we are complicit in the systems of evil in the world — it is this we are called to confess and turn from. May we inspire each other to do so.

Next week Tuesday, 10 September 2013, the Campaign for Safe Communities and other partner organisations will be making a solidarity visit to Manenberg to speak to community members about their experience with gang violence and to show our support.

Over 26 people have been killed over the last few weeks owing to gang violence. 14 Schools had to be closed in August after teachers, fearing for their safety as well as the safety of their learners, requested support from the government and threatened to walk out en masse.

Recognising that this is a crisis, the province has since shifted R6 million from the education budget towards the deployment of Metro police in Manenberg. This has reduced the levels of gun violence on the streets, but the climate of tension and fear remains.

Community members, particularly the youth, have been deeply affected by the loss of family members, witnessing extreme acts of violence, and being directly victims of violence themselves. The youth need to be given special consideration. Trauma caused by exposure to violence makes it impossible for many of the youth to function effectively at school, and school closure means that they are significantly behind in the curriculum. Many youth also risk being caught in the crossfire while walking to and from school. Unfortunately, many of the youth also end up being perpetrators of violence, targeted for recruitment by the gangs and many youths feel that joining a gang is the only way to ensure their safety.

Gangsterism is now spilling over from Manenberg to other areas such as Hanover Park, Mitchells Plain and even Khayelitsha. We must not turn our back on the Manenberg community when their constitutional rights to life, safety and education are being threatened daily. Everyone, whether they live in Manenberg or not, has a responsibility to oppose this violence and support the people of Manenberg in the building of a safe community.