The Pain and Praise of our Birth…

“For it was you who formed my inward parts, you knit me together in my mother’s womb. I praise you, for I am fearfully and wonderfully made. Wonderful are your works; that I know every well. My frame was not hidden from you when I was being made in secret, intricately woven in the depths of the earth.”
Psalm 139: 13-15

No wonder there is a Jewish proverb that goes something like this:
“God could not be everywhere and therefore God made mothers.”

On Ascension Day I officiated at a wedding. The couple have been in love for a long time and finally decided to come out in the open and get married. 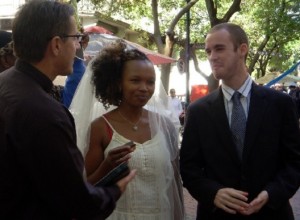 The ceremony took place at the World Economic Forum between Big Business and Government. To our surprise we walked right up to the entrance of the CTICC to where all the delegates were getting out of their cars. (Then again, others have recently managed to land a commercial aeroplane at a military base filled with wedding guests – so perhaps we should not be too surprised.) Then the cops moved us to the perimeter – after removing the “shower head” that was hovering over the beautiful bride’s (Government) head. Five SAPS vans, one Nyala and three Metro Police then followed us.

There were a number of corruption scandals who gathered to witness and celebrate the wedding. 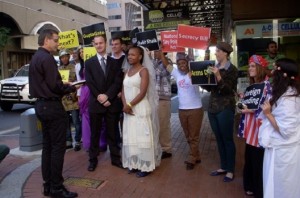 Big Business and Government then exchanged vows: “I call on all the corruption scandals here present to witness that I Government do take thee Big Business to be my (un)lawful wedded husband, to have and to hold from this day forward, for better and NOT for worse, for richer and NOT for poorer, in sickness (of others) and in health (of us) to love and to cherish, and forsaking all others (especially the poor) till death us do part (or until the money runs out).” 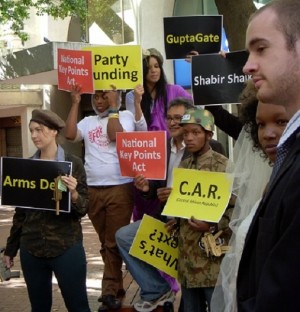 Lady Justice tried to voice her objection but was quickly silenced by the Secrecy Bill and the Key Point Legislation Act. All the scandals applauded when I gave the couple permission to kiss.

Ascension Day reminds us that God alone has ultimate power and calls us to hold the powers of this world to account and to mock their belief that they have absolute power. To call them out every time they ignore the vulnerable who they are called to serve. In 2012 R30 billion was stolen through corruption. We say “No to R1 – one vote”.

This is one marriage that should dissolve. Alan