This past week we celebrated the 60th anniversary of the women’s march to the Union Buildings in Pretoria. Sixty years ago, on August 9, 1956 20,000 women took to the streets with a petition signed by 100,000 people calling for the end to the pass laws. The march was led by Lilian Ngoyi, Helen Joseph, Rahima Moosa and Sophia Williams. When the women arrived, they began to chant words that women still chant today, “Wathint’Abafazi Wathint’imbokodo!” They translate to, Now you have touched the women, you have struck a rock. The phrase has evolved to what we often hear today, “You strike a woman, you strike a rock” and it represents the courage and strength of women in South Africa.

The women of 1956 also stood for thirty minutes in silence with their hands raised in a congress salute. Anyone who practices silence knows that thirty minutes is a period of time that one often works up to. It is not easy to achieve thirty minutes of silence right away. Yet, it is as if these women used the silence to speak for them. In the quiet of their stand together, their message was clear. It was as if in the quiet things could be heard, “We are here. We are serious. We have strength you know nothing about.” Their silence spoke volumes. 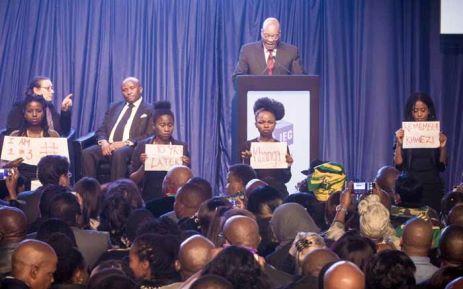 Simamkele Dlakavu, Tinyiko Shikwambane, Naledi Chirwa, and Amanda Mavuso are the names of four women who recently engaged in a silent protest during a press conference where Jacob Zuma was announcing the election results. They stood silently dressed all in black, holding signs that read: Remember Khwezi, Khanga, Ten years later, and I am 1 in 3. Their protest they named was against patriarchy and the culture of rape of women, where 1 in every 3 women in South Africa are likely statistically speaking to have been raped. They were remembering “Khwezi” the pseudonym given to the woman who accused Jacob Zuma of rape ten years ago.

One does not even have to support the cause of these four women to recognize the power of their witness. They used their creativity to give voice to their convictions and their message was broadcast worldwide. The South African Police share that a woman is raped every 36 seconds in this country, while many activist groups challenge that data naming it is closer to every 26 seconds. For four women to silently |protest such a culture in the midst of a political event, hats off to Simamkele, Tinyiko, Naledi, and Amanda.

The women of 1956 were persecuted for the ways in which they organized for change in the world. Lilian Ngoyi spent 70 days in solitary confinement and lived with bans placed on her for 11 years. Helen Joseph was arrested several times and had her last ban lifted when she was 80 years old. She was the first person to be placed under house arrest under the Sabotage Act and was a constant target with bullets smashing windows and a bomb even exploding at her front gate. During the Truth & Reconciliation Commission she was quoted as sharing, ““How a weary old girl, an ou tannie like me can be a threat to state security only they can say.” Yet, threat often comes from those who know how to organize for change.

Silence is a discipline that is held across many faith traditions. It is not a comfortable place to be, for in silence things bubble to the surface. In silence truths become clear, actions become visible, and words become sharpened. I encourage us all this week to sit in silence remembering the people who have inspired us in the ways they have worked for change. In our silence may we reflect on the world around us and the ways we might be called to be involved in the work of bringing much needed change. Silence roots us in the place of depth that brings strength, conviction, courage, and a peace we can’t explain. May our time of reflection root us for the work of change.

With you on the journey,
Michelle