As we reflected last Sunday, after calling Herod a fox, Jesus cried: “Jerusalem Jerusalem … how often I have desired to gather your children together as a hen gathers her brood under her wings…” (Luke 13)

Prime Minister of New Zealand, Jacinda Ardern has lived this text into being this past week. In so doing she has shown the world what healthy, wise and strong leadership looks like. Ardern is not reading from a prepared script. She is simply honouring her heart and head – a heart that feels deeply and a head that is deeply thoughtful. Her own grief has set the tone for her nation’s grief. She articulates both her anger at the cause of grief and expresses her gentleness for the grieving. She rightly chooses to keep the spotlight on the loved ones of the deceased rather than the killer.

Ardern’s repeated words to the grieving: “You are us.”, are the most healing words she could possibly say. Spoken with the authority of a surgeon, she sews together with her words the truth that the killer attempted to shatter with his bullets. We are all one. These words at the same time expose the killer’s blindness and the blindness of Islamaphobia as well as all other forms of discrimination.

Without hesitation she has named the instrument (actually it’s an idol) – the gun – that when mixed with fear and hate, causes death on a massive scale. Simply put: she cares more about saving lives than a tiny group of people’s desire to own a firearm.

Prime Minister Ardern is a challenging sign of hope to us all.

A story by Steve Mellon: “A woman approached the Islamic Center of Pittsburgh mostly unnoticed and carefully placed a bouquet of yellow flowers among the branches of a bush near the center’s concrete steps. She then crossed Bigelow Boulevard and sat on a stone retaining wall and wept. 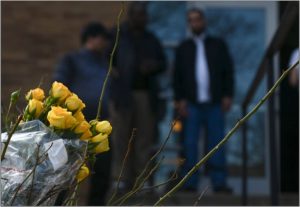 She said she’d lost a family member when a man of hate entered the Tree of Life synagogue in October and gunned down people of faith. Now bullets had shattered lives at two New Zealand mosques.

The flowers and her quiet, anony- mous presence were gestures of solidarity with the Muslim community, she said. When a man at the mosque learned of the woman’s presence, he briefly held his hand to his heart, then crossed the street to chat with her.

Moments later, he guided her back across Bigelow Boulevard, up the concrete steps, and into the center’s lobby. The man offered the woman a chair and introduced her to others then gathering for traditional Friday prayers.

In the sunlit room, people of different faiths gathered in a small circle and shared stories of pain and sadness and strength and hope.”