We decided to use our towering Gothic steeple, situated on Greenmarket Square in a busy part of Cape Town, as a billboard for the Gospel. With hand-painted bright Yellow Banners we engage the public on topical issues from a Gospel perspective. We aim to provoke questions and reflection.

Herewith a link to a pamphlet –  Yellow Banner Theology 2013 – depicting some of the banners already produced. More are being planned and produced …

Pictures of other banners produced can be viewed under DIGGING DEEPER/GALLERIES/MATTERS OF JUSTICE.

To all the Queers of Africa
Our response to the surge of anti-gay legislation and sentiment that is sweeping Africa.

On Tuesday 15 April 2014 another yellow banner in protest against injustice – this time in solidarity with those persecuted for their sexual orientation – was raised by friends of David Olyn (who was brutally murdered directly as a result of his sexual orientation) as well as a representative of the Triangle Project.

To all the Queers of Africa:
Thus says the LORD:
“I love you as you are.”

From Ugandan Queers to David Olyn
murdered for being a “moffie”.
22 March 2014 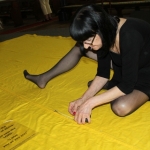 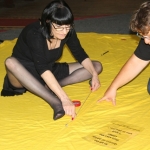 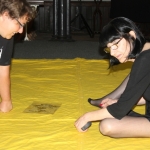 So … who are we calling makwerekwere?

Xenophobia is very real in South African society. Jesus, who himself was a child refugee in Egypt, urges us to welcome the foreigner into our communities. This banner was first raised just before Christmas 2014.

On 19 April 2015, after the morning worship service, the banner was raised again in solidarity with those who had died and suffered through the recent xenophobic attacks in KwaZulu-Natal and Gauteng provinces.

no images were found