One of the questions that I am often asked — especially after I have given my assessment on the state of our nation and world — is “Alan what gives you hope?” My answer: “The young social activists of our country.”

On Wednesday I had the privilege of attending a function hosted by the Open Society Foundation (OSF). The OSF is, among other things, a funder organisation of many different civil society movements. They brought together a number of the organisations that they fund for a round table discussion, facilitated by Justice Malala. 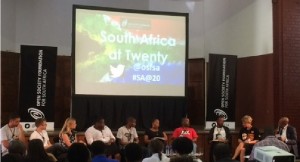 I was inspired by their courage and creativity. I was given hope by their own hope for change. Something Justice Malala picked up on from the panel discussion (picture alongside) was that everyone spoke of the crucial importance of holding those in power to account. Accountability was the key word. As one of the older anti-Apartheid activists said: “In the last 20 years since democracy we have been let down by human conduct.” Well as sad as that is, it should not surprise us. We read in the Scriptures of a people who needed to be constantly set free — sometimes from outside enemies but most of the time from themselves. And this is where my hope ultimately returns — the great grace of God who offers Divine pardon over and over, empowering us to begin over to reconstruct society for the common good.

Drain us now of distractions, O God, and free us from all that diverts out attentions, so that all our senses can focus on the Christ child’s coming.

Show us again, in the most notable, yet most humble of births, the mingling of divine and human we call incarnation.

In the coming birth of your child and ours, teach us the dimensions of holy mystery, deliver us from preoccupation with trivial things, and focus our hearts, with reverent diligence, on things eternal.