Last Saturday I attended the Grow to Live Workshop at the Soil for Life Resource Centre in Constantia. The workshop bio says: “Directly, or indirectly, all food comes from the soil. Today soils are tired, overworked, depleted, sick and poisoned by synthetic chemicals. The quality of

our food has suffered and so has our health. All life will be healthy or unhealthy according to the fertility of the soil. Since soil is the basis for all human life, our only hope for a healthy world rests on re-establishing the harmony in the soil.”

Soil for Life is a public benefit organisation that teaches people how to grow their own food, improve their health and well-being, and nurture and protect the environment.

Soil for Life believes that “EVERYONE has the potential to grow nutritious food with whatever resources they have available. Since we started in 2002 we have helped thousands of people in resource-poor communities to develop productive and sustainable home food gardens”.

I can testify that just being in the abundantly luscious garden made me feel more alive. The connection with everything living was obvious. I think I even heard the food growing.

There was so much to learn and now so much to practice. There was a time when everyone grew their own food. The awareness of feeling more alive made me realise just how detached I am from what gives me life. Why was I not taught this at school when I was growing up? Seems crazy that it wasn’t on the syllabus year in and year out!

Please consider supporting this LIFE-GIVING work. I hope you will visit Soil for Life especially if you have not done so already. You can buy your vegetables from them and support their valuable training programmes.

During the early hours of Tuesday morning a terrible thing happened in this city. A driver — allegedly drunk — lost control of his vehicle and crashed into the Viglietti sports car showroom on Roeland Street. What makes this story so tragic is that a homeless person who was sleeping in front of the showroom was crushed to death in the process.

This sad event is a tragic parable for our times. And as with all parables there are layers upon layers of meaning and, in this case, layers of tragedy. 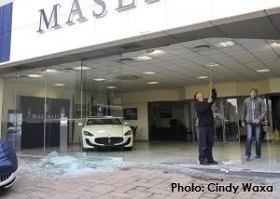 The second is that we live in a world where obscene wealth and desperate poverty lie down together side-by-side. Every time I drive past this particular showroom at night I see this glaring truth glow guiltily before my eyes. Sports car and homeless separated by a see-through pane of glass. We dare not plead ignorance.

The third is that we live in a world where the poor are the victims of our way of life that has gotten out of control. We are drunk (although we deny it) consuming way too much and the poor pay for our reckless living with their lives.

The fourth is that we live in a world where the poor are seen but not acknowledged or known. They remain anonymous. In the article I read about this event it was so sad to read that nobody knew the deceased’s name. We are trying to see if we can host a memorial service for him.

Earlier this year we had a sermon broadcast on SAFM – one of the SABC’s radio stations. This sermon – entitled Lazarus and the Rich Man – was recently rebroadcast, and we have received a few requests for a link to the sermon. You can download the sermon using the download link provided below.

You can download other sermons by accessing our sermon archive: