Signs of protest and hope:
All Saints candles set on the gravestones in a Polish Cemetery.

God our com-fort-er,
you are our refuge and strength,
a helper close at hand in times of trouble.
Help us so to hear your word
that our fear may be dispelled,
our loneliness eased,
and our hope reawakened.
May your Holy Spirit lift us above our sorrow,
to the peace and light of your constant love;
through Jesus our Lord.
Amen.

For whose life do you give thanks today?

“Hear the good news: We do not live to ourselves, and we do not die to ourselves. If we live, we live to the Lord, and if we die, we die to the Lord; so then, whether we live or die, we are the Lord’s. For to this end Christ died and lived again, so that he might be Lord of both the living and the dead.

Lately I have been thinking quite a bit about death. In particular my own. And I realised that if I had to die now (or pretty soon) I would carry a deep sense of sadness. In fact sadness doesn’t really sum it up. I would feel great grief. Gigantic grief.

Grief that is rooted in knowing that I have not yet lived my life as I know I was created to live it. Grief for all the unfinished stuff. I am not referring to “things” I would still like to do or places I would still enjoy seeing – as in a type of bucket-list. Rather I am referring to those aspects of my living that I have yet to hand over to the Jesus Way. Why haven’t I surrendered more of my life? There is basically only one reason: fear. Yet, if I knew for certain that I was going to die in a year’s time I think I would make the changes without fearing any of the consequences.

I have found the thoughts of author Ron Rolheiser helpfully challenging in these matters:

How do we prepare to die? How do we live so that death does not catch us unaware? What do we do so that we don’t leave this world with too much unfinished business?

The first thing that needs to be said is that anything we do to prepare for death should not be morbid or be something that distances or separates us from life. The opposite is true. What prepares us for death, …is a deeper, more intimate, fuller entry into life. We get ready for death by beginning to live our lives as we should have been living them all along. How do we do that? 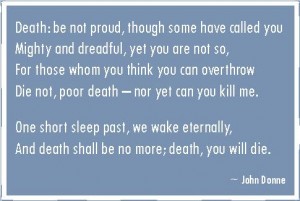 It’s easier to die when one has been, even for a moment, fully alive. What makes it difficult for us to die, beyond all the congenital instincts inside of us that want us to live, is not so much fear of the afterlife or even fear that their might not be an afterlife. What makes it hard to die is that we have so much life yet to finish and we finish it by loving more deeply and expressing our love more freely.

Grace to you in your living and in your dying, Alan

Dare to have your life re-storied by the Gospel

The stories we tell ourselves and each other are how we make sense of the world and our place in it. Some stories become so sticky, so pervasive that we internalize them to a point where we no longer see their storiness — they become not one of many lenses on reality, but reality itself. Stories we’ve heard and repeated so many times they’ve become the invisible underpinning of our entire lived experience”. ~ Maria Popova

“Make up a story… For our sake and yours forget your name in the street; tell us what the world has been to you in the dark places and in the light. Don’t tell us what to believe, what to fear. Show us belief’s wide skirt and the stitch that unravels fear’s caul.”

I recently read an interesting article entitled “Stuck in an old story”, written by Tania Katzschner, who is a socio-ecologist based at UCT. Addressing the issue of “invasive alien vegetation”, Katzshner challenged the old story that she believes we are stuck in by stating that “they are not a disease awaiting a cure, [but rather] they are a constitutive aspect of our social life…,”

Regardless of the field of study, it is brave to challenge the accepted and dominant story. This is because so much is connected to it. Tampering with the dominant story is like messing with the foundation of a building — it causes everything above to shake. Consequently we required to re-evaluate each floor and sometimes a complete demolition is necessary which can be costly and painful especially if we have lived there for a long time and happen to fancy the place.

This applies to every aspect of our lives. As Maria Popova, from @Brainpickings writes: “The stories we tell ourselves and each other are how we make sense of the world and our place in it. Some stories become so sticky, so pervasive that we internalize them to a point where we no longer see their storiness — they become not one of many lenses on reality, but reality itself. Stories we’ve heard and repeated so many times they’ve become the invisible underpinning of our entire lived experience”.

Or as the poet Muriel Rukeyser said, “The universe is made of stories, not atoms.” This is so true! We each have stories that invisibly underpin our entire lived experience. Stories we have internalised about ourselves, others, God and nature. To question them takes bravery. Today we will reflect on the story that Baptism proclaims. It is a counter-cultural story. It is a subversive story threatening the ruling stories of domination. Sadly it is also a story that has been co-opted and tamed over the years, entangled in law and dogma. It has become a dominant and an exclusive story that itself must be bravely questioned.

I agree with spiritual leader Llewellyn Vaughan-Lee, who says at the root of our ecological and economic crises is a ‘story’ crisis: a dysfunctional worldview about the universe and our place in it. I believe that the untamed story of baptism is the exact counter story the world needs to hear to be healed and set free.

Here is an example of the transforming power of story from The Name of the Wind by the author of epic fantasy Patrick Rothfuss:

“Chronicler shook his head and Bast gave a frustrated sigh: “How about plays? Have you seen The Ghost and the Goosegirl or The Ha’penny King?” Chronicler frowned. “Is that the one where the king sells his crown to an orphan boy?” Bast nodded. “And the boy becomes a better king than the original. The goosegirl dresses like a countess and everyone is stunned by her grace and charm.” He hesitated, struggling to find the words he wanted. “You see, there’s a fundamental connection between seeming and being. Every Fae child knows this, but you mortals never seem to see. We understand how dangerous a mask can be. We all become what we pretend to be.”

Chronicler relaxed a bit, sensing familiar ground. “That’s basic psychology. You dress a beggar in fine clothes, people treat him like a noble, and he lives up to their expectations.”

“That’s only the smallest piece of it,” Bast said. “The truth is deeper than that. It’s…” Bast floundered for a moment. “It’s like everyone tells a story about themselves inside their own head. Always. All the time. That story makes you what you are. We build ourselves out of that story.”

Frowning, Chronicler opened his mouth, but Bast held up a hand to stop him. “No, listen. I’ve got it now. You meet a girl: shy, unassuming. If you tell her she’s beautiful, she’ll think you’re sweet, but she won’t believe you. She knows that beauty lies in your beholding.” Bast gave a grudging shrug. “And sometimes that’s enough.”

His eyes brightened. “But there’s a better way. You show her she is beautiful. You make mirrors of your eyes, prayers of your hands against her body. It is hard, very hard, but when she truly believes you…” Bast gestured excitedly. “Suddenly the story she tells herself in her own head changes. She transforms. She isn’t seen as beautiful. She is beautiful, seen.”

“What the hell is that supposed to mean?” Chronicler snapped. “You’re just spouting nonsense now.” “I’m spouting too much sense for you to understand,” Bast said testily. “But you’re close enough to see my point.”