Truth is larger than fact. There are times when the facts simply can’t adequately hold the truth. For example, there is no fact that could sufficiently account for a parent’s love for their child. Or for the liberation of a long-oppressed people. When the facts fail the truth, we turn to metaphor and myth, satire and story, parable and poetry. To say that someone is the most beautiful person in all the world is not meant to be evaluated on a factual basis, but rather to be appreciated for the truth that the statement makes about their love or attraction toward the person.

Similarly, the validity of the Exodus narrative (and much of Scripture) does not rest on whether it factually took place once upon a time or not, but rather on the truth that it announces for all time. (It is most likely that the Exodus narrative was the accumulative wisdom gleaned from many cycles of oppression and liberation all sewn together into a single archetypal liberation narrative.) The narrative’s purpose is to speak timeless truth:

This brings us to this Sunday’s reading: “When the people saw that Moses delayed to come down from the mountain, the people gathered around Aaron, and said to him, “Come make gods for us, who shall go before us … Aaron took the gold from them and formed it in a mould, and cast an image of a calf…”

It is important to note that the golden calf may be seen as a replacement of the liberating YHWH or a representation of YHWH. The latter is a far more subtle form of idolatry and therefore potentially more dangerous. An idolatrous representation of YHWH would include attributing non-liberative characteristics to YHWH (see last week’s reference to “make no wrongful use of the name of God”.) An example today is the prosperity teaching (read: heresy / cult) calling on Jesus’ name in order to prosper financially by TV evangelists who believe owning a private jet is crucial for them to spread the word about the humble sandalled Jesus. (The same Jesus who happened to warn that it was pretty impossible to fly a jet through the eye of a needle.)

An even subtler form of idolatry includes that which is not necessarily religious at all and as a result are seldom named as gods / idols, yet they solicit our unquestionable belief in their professed saving power. Like believing that the death penalty will save us from crime. Or the gun will keep me safe. Or low taxes on the rich will be good news for the poor. Or that the quality of health care or education must correlate to how much money one has. These come to us through laws and systems rather than doctrines and creeds. We learn proverbs like “time is money” off by heart until we believe that everything is a product to be traded and that the value of anything or worth of anyone is ultimately determined in monetary terms.

With the above-mentioned examples, it should be clear that there is no such thing as a “non-believer”. We all believe in something. We all worship something. And whatever we worship is our god – like it or not. If the word worship does not connect with you then ask yourself what is the object of your ultimate concern? (See: Paul Tillich.) The answer to this question is our god. Simply put, whatever we give our heart to is our god, religious or not. For this reason, we are called to do the urgent and crucial work of “know yourself” to discover who / what we believe in. Warning: We may be surprised to discover that we don’t always believe in what we would like to think we believe in or what we profess to believe in. (Not everyone who calls me Lord, Lord will enter the reign of God – says Jesus.) This is why the scriptures care less about atheism than they do about idolatry, because we could be worshiping the very ways that crucified Jesus while singing his praises on our lips.

How do we know the difference between God and an idol? Or God and false gods? In short: Idols or false gods always demand sacrifice. Idols take life while promising new life. Think of the military or of the idol of nationalism or tribalism that worship little lines in the ground called borders. Drawn and defended with blood. The true God on the other hand does not demand sacrifices. Rather the true God demands justice, mercy, humility, truth, gentleness. In other words, the true God demands that which will promote and protect life – all of Life in all its fullness.

This is the only scale that really matters: does our living bring life or death?

So just because we may never have carved out an image of a calf doesn’t mean we do not worship any idols. Furthermore, just because we have Jesus’ name repeatedly on our lips does not necessarily mean Jesus is our God. And for those of you reading this who think you are exempt from idolatry because you don’t believe in any God or god or idol – well once you have found the words that work for you – I invite you to check what your ultimate concern is and whether honouring your ultimate concern brings life or death – for all of life.

Ask not what you must do to keep God on your side, but rather ask what God has done to keep on your side.

It may surprise you but the Bible is not really concerned about atheism. Meaning it does not waste too much print in convincing people that there is a God that we should believe in. It takes God’s existence as a given. 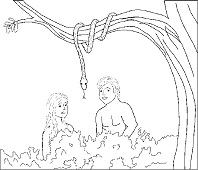 The Bible is far more concerned about idolatry — the belief in false gods — and as such it uses an enormous amount of print on helping us to see the real nature of God. Remember in the Garden of Eden the sneaky snake did not try and convince Adam and Eve to doubt whether there was a God or not. Rather the temptation revolved around the nature of God, which in effect was saying: “Do you really trust that God loves you? Really? I think not! God is denying you freedom and knowledge. You need to look after yourself. Take, eat and become like God yourself.” [A sneaky paraphrase].

Granted we don’t carve out little statues to bow down to anymore (although TVs do come to mind) but all too many of us bow down to what the dominant culture has determined to be of greatest value. And what is that when all is said and done? Money. The dominant culture — world over — says millions of times per day in millions of different ways that “you are nothing without money”. Money is the god above all gods — because with it we can acquire all the others — happiness, acceptance, success, validation, security, freedom, health and control (just to name a few). Now these are not necessarily bad at all — but when they become our ultimate concern we make them into an idol — and idols always, always demand sacrifice — and this leads to so much destruction and death in the world.

Now here is the really crazy thing. We can even end up praying to Jesus to help us to worship these other gods. In fact there are churches who exist and grow purely on the promise that if we pray just right (and contribute just enough) then Jesus will bless us with more and more money. As if Jesus were interested in helping us to worship another god. At the end of the day our “God” is whatever we place our ultimate trust in and what we have given our heart to. And even atheists have given their hearts to something — so this makes us all believers. The question is not whether we believe or not — but rather what we believe.

Fierce or friendly? Merciful or judgemental? Generous or stingy? Inclusive or exclusive? For all or just for some? Nationalistic or universal?

These are worthy questions to wrestle with. In fact, the Bible is filled with people who wrestle with God. Remember Jacob — he refused to stop wrestling until he grew in understanding of who God is. And he was subsequently re-named Israel. We are all called to be Israel — ”God Wrestlers”.

The invitation of Jesus is to trust that what he says and does represents God’s nature and so we are invited to wrestle with him. To refuse to let go until we grow in understanding.

Wrestling takes effort and energy. It also takes rest and reflection between rounds, not to mention fitness and technique training. What does your training programme look like? How much time per day/per week does it take? What exercises does it include? Have you got a training partner(s)?

As we train, question and wrestle, may we be set free from fear to confess our idolatry even (or especially) if our worship of Jesus has turned into a means to worship idols itself.

There really is no more exciting question to carry than to ask ourselves: “What is my God like?” “Where have I given my heart?”