“I had never been so close to death before.
For a long time, as I lay there trying to clear my mind, I couldn’t think coherently at all, conscious only of a terrible, blind bitterness. Why had they singled me out? Didn’t they understand? Had everything I’d gone through on their behalf been utterly in vain? Did it really count for nothing? What had happened to logic, meaning and sense?
But I feel much calmer now. It helps to discipline oneself like this, writing it down to see it set out on paper, to try and weigh it and find some significance in it.
Prof Bruwer: There are only two kinds of madness one should guard against, Ben. One is the belief that we can do everything. The other is the belief that we can do nothing.
I wanted to help. Right. I meant it very sincerely. But I wanted to do it on my terms. And I am white, and they are black. I thought it was still possible to reach beyond our whiteness and blackness. I thought that to reach out and touch hands across the gulf would be sufficient in itself. But I grasped so little, really: as if good intentions from my side could solve it all. It was presumptuous of me. In an ordinary world, in a natural one, I might have succeeded. But not in this deranged, divided age. I can do all I can for Gordon or scores of others who have come to me; I can imagine myself in their shoes, I can project myself into their suffering. But I cannot, ever, live their lives for them. So what else could come of it but failure? 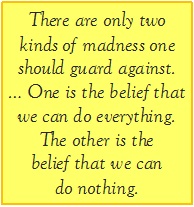 Whether I like it or not, whether I feel like cursing my own condition or not — and that would only serve to confirm my impotence — I am white. This is the small, final, terrifying truth of my broken world. I am white. And because I am white I am born into a state of privilege. Even if I fight the system that has reduced us to this I remain white, and favored by the very circumstances I abhor. Even if I’m hated, and ostracized, and persecuted, and in the end destroyed, nothing can make me black. And so those who are cannot but remain suspicious of me. In their eyes my very efforts to identify myself with Gordon, with all the Gordons, would be obscene. Every gesture I make, every act I commit in my efforts to help them makes it more difficult for them to define their real needs and discover for themselves their integrity and affirm their own dignity. How else could we hope to arrive beyond predator and prey, helper and helped, white and black, and find redemption?
On the other hand: what can I do but what I have done? I cannot choose not to intervene: that would be a denial and a mockery not only of everything I believe in, but of the hope that compassion may survive among men. By not acting as I did I would deny the very possibility of that gulf to be bridged.
If I act, I cannot but lose. But if I do not act, it is a different kind of defeat, equally decisive and maybe worse. Because then I will not even have a conscience left.
The end seems ineluctable: failure, defeat, loss. The only choice I have left is whether I am prepared to salvage a little honour, a little decency, a little humanity — or nothing. It seems as if a sacrifice is impossible to avoid, whatever way one looks at it. But at least one has the choice between a wholly futile sacrifice and one that might, in the long run, open up a possibility, however negligible or dubious, of something better, less sordid and more noble, for our children…”

There are so many aspects of this piece from A Dry White Season that deserve our attention, but I would like us to pay attention to Brink’s ability at pay attention. His insight into himself and his relationships as well as the socio-political history and immediate context in which he lived is piercingly insightful. This does not come easily or quickly. It comes as a result of the longest of journeys — the journey within.

Socrates said: “The unexamined life is not worth living”. The journey of self-examination demands much contemplation (as Thomas Merton invites); as well as great courage to connect with others who see the world from a different angle to ourselves. And because they see from a different angle they will help us to see shadows where we only see light and help us to see light where we only see shadows.

The season of Lent more than any other invites us on this journey of self-examination. In other words, Lent calls us to deepen our contemplation and stretch our connections with others. This is not easy and nor can it be rushed but it is essential if we want to live life in ways that honour Jesus.

Without contemplation, without the intimate, silent, secret pursuit of truth through love, our action loses itself in the world and becomes dangerous.”