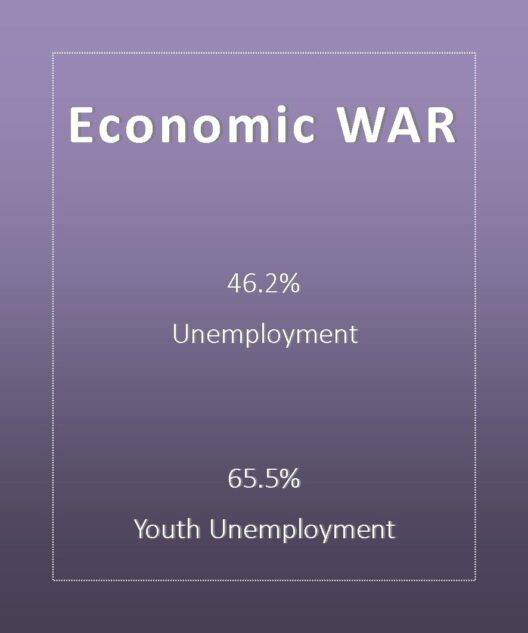 This week we heard that South Africa’s unemployment rate reached a new record high of 35.3% at the end of 2021. (Compare to other countries.) According to an expanded definition of unemployment that includes those discouraged from seeking work, 46.2% of the labour force was without work in the fourth quarter of 2021. While the youth unemployment rate is at an unbelievable 65.5%.

Behind these figures are suffering and hungry people. It was reported this week that seven children died of starvation in the Eastern Cape where an estimated 72% of the population live below the poverty line. What a horror to be unable to feed one’s family. Without any sign of things changing, people live in a perpetual state of present traumatic stress disorder. All this is only a stone’s throw away from places of extensive wealth, causing despair and desperation to easily couple with anger and rage.

When the Kremlin spokesperson recently said the West was waging “economic war” against Russia, I thought how true this is for the unemployed and destitute of South Africa. To be sanctioned or prevented from economic participation is to be attacked. For Russia it happened instantly and justifiably as a result of their unprovoked attack on Ukraine, but for 60% of South Africans who live below the poverty line it has been brought to the boil slowly and as such it is not recognised as war. Without recognition that 60% of SA are in a war there is little urgency to end the war. What war?

I am always astounded at the ingenuity that accompanies war. All sorts of industries are instantly converted to assist the “war effort” as ploughshares and pruning-hooks are miraculously turned into swords and spears. When the victims of the war are “only the poor”, however, the idea of turning swords and spears into nourishing utilities is impossibly unrealistic according to the untouched powers that be.

When the stones, that are only a stone’s throw away begin to fly, those who throw them will be called violent criminals and dealt with accordingly. Few will see them as a desperate people finally taking up stones in a war they have long suffered. Stones will be met with urgent State action – often violent – until “peace” is restored. For the 60% this “peace” is in reality the continuation of economic war against them. A war that is not recognised as a war. This self-defeating cycle will repeat itself again and again with growing intensity. And in the end protecting a false peace will be far more costly than the establishment of justice and fairness.

It is within this context that populist politics gain traction and authoritarianism takes root. In an economic war the ‘enemy’ is easily hidden, if not invisible, and this energises the search for visible scapegoats. It is therefore not surprising in these times that xenophobic and vigilante organisations rise in search of these scapegoats to blame and beat. Tragically, the scapegoats close at hand are people equally poor and desperate. In SA these often take the human form of vulnerable foreign nationals. As in Bredasdorp where more than 1000 people, mostly from Zimbabwe and Malawi, are now living in municipal halls and a mosque after they were targeted and chased out of their homes. The traumatised traumatising the traumatised.

With all of this in mind we gather today to share in the sacrament of Holy Communion. This is not a private ritual of forgiveness to secure a spot on a heavenly cloud. At this table, Jesus our host, reminds us of his economic dream of equality on earth where all are included and all receive as we have need. To share in Holy Communion is to commit ourselves to an economy of nourishment for all. To share in this sacrament is to commit to the forgiveness of debts that keep people in various forms of systemic slavery. It is to be reminded that it is not God’s will that some are rich and some are poor. Inequality is at odds with God and leads to self-destruction. God is the great lover of justice who longs for a fair balance where those who have much, do not have too much and those who have little, do not have too little.