The service today is being recorded by the SABC in order to be broadcast throughout
SA on Christmas Day. So in other words we get to celebrate Christmas early. Happy Christmas today!! At first I thought that this is a little odd, but then I realised that the followers of Jesus are to live life in the constant celebration of his birth among us.
“Joy to the world – the Lord is come…” should be on our lips everyday! Everyday
we should be on the look-out for the Divine among us.

If Jesus is consistent (which he certainly is) his presence among us will be undercover, just as his first coming among us. I mean what could be more “undercover” than a baby
of an unmarried peasant girl cradled in the feed trough of a cattle shed? Even the wisest
of sages went to the wrong address to look for him. We are always told to “follow the money!!!” Well that is exactly what the so-called wise men did and all they found was an ignorant and paranoid head of state. Following the money doesn’t lead to Jesus … it leads to the powers of death. 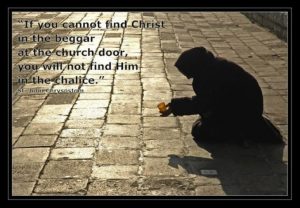 Jesus was homeless. He was the child of humanity without anywhere to lay his head. He was rejected and ridiculed. He was accused of having an evil spirit. Spat upon and beaten…

Many of the homeless people of our city have similar stories to tell. Very often treated like trash. Sometimes they are mistreated by security guards … who themselves are not treated much better. Homeless people are told to “move on” all the time – convincing them that they do not belong.

Thank you to everyone who each Sunday provide lunch for around 300 people at the Service Dining Rooms. Today we all get to join in this act of service as we occupy Church Street to host a Christmas Banquet for the people who are marginalised within this city. There will be over 500 people for the seated meal and around 200 takeaways – so please we need all the help we can get.

Be on the lookout for Jesus – for the Divine is come to be our guest today.